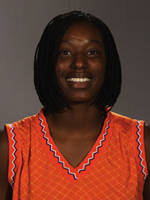 Since her transfer to Clemson before last season, Leah has been one of the team’s most solid contributors. In her first season, she averaged almost six points per game and finished second on the team in both rebounds and steals. Averaging over three rebounds and nearly two steals per game, she also earned a spot in the starting lineup in 12 of the 29 games she played in during the 2001-02 season.

These statistics should come as no surprise after one realizes what she had previously accomplished. Prior to Clemson, Leah was named a Kodiak All-American while she played for Gulf Coast Community College in Florida. She averaged over 17 points, seven rebounds and three steals per game her sophomore year en route to earning the Pan Handle Conference Player-of-the-Year award.

Leah had established herself as one of the nation’s premier junior college players in a single season. After she visited Clemson, met her future teammates and likely learned of the Lady Tigers’ 100-percent graduation rate for four-year players, it did not take much longer for her to realize that this program was the right fit for her.

“One reason I came to Clemson was for the location,” said the 5’11” forward from Atlanta. “Another was academics. I felt like Clemson gave me a good opportunity to graduate. One of my previous coaches made Clemson very appealing to me, but the team was the biggest thing that brought me here. I loved the team and I had so much fun when I came to visit.”

“At one point I had narrowed it down to two schools,” she added. “I thought Clemson was the better choice. I wanted to be sure that I went to a school where everything would work out for me.”

Like many collegiate players and several of her teammates, the transition to Clemson was not easy at first. Struggling to find time and responsibility, Leah said that the tough adjustment period made her very unsure of herself and her commitment to Clemson. In the end, however, everything has worked out for her and she believes that it was just a matter of time before it did.

“It was not a shock to come here, but I did not have any time to do the things that I needed to get done,” she said. “It was hard because the college that I came from was a small step up from high school; but coming here was a giant step up and it took me some time to get used to.”

“I was down because at first I felt like I could not do it,” she said about balancing school and basketball. “I had teammates who I talked to about it because they were going through the same thing. I was very unorganized, and it actually took me until this year to get everything together. I am doing a lot better in school because I can come to class prepared and I have learned how to schedule my time.”

As Leah has learned how to adjust to her life at Clemson, she has created a favorable impression on a number of people, particularly her coaches and her teammates. The coaching staff, especially Head Coach Jim Davis, is extremely fond of Leah’s work ethic and her refusal to quit. Leah thinks that the coaches are most impressed with her decision to adopt the defensive mindset that fits the system of this team.

“I have become so much more defensive-minded since I came here because Coach Davis emphasizes defense so much,” she said. “I believe that I am everything Coach Davis wants me to be on defense.”

“My greatest compliment to Leah Roper is that I would take a dozen players just like her,” said Coach Davis. She is one of the hardest workers I have ever coached. She contributes so much to our team’s success.”

Her newfound sense of defense is just one of the changes that Leah made to her game after she arrived in Clemson; her steals per game average over the past two seasons is evidence of this. Although she had some obvious strengths coming from junior college, however, she believes that there are still some things that she needs to improve if she wants to help her team.

“At my last school, I was one of the go-to players,” Leah said. “I shot the ball very well and I drove to the basket a lot. Things have changed though, because I think what used to be my greatest strengths have not improved since I came here. Now I focus on hustle and improving my shooting and ball-handling skills instead. If I step those things up, I can really help the team a lot more.”

Despite her desire to improve, Leah possesses a rare strength that has given her immeasurable support: her faith. Her belief in God, her dependence on him for guidance and God’s effect on the way she lives her life are some of the ways that Leah applies her faith to basketball.

“I have a strong belief in God,” she said. He gives me a lot of peace of mind. You can always count of God, but you cannot always count on anyone else. He has helped me through a lot of things and he has made me realize that he will never give up on me.”

Leah’s faith also has taught her to life a happy life, and her jovial personality has a very positive effect on her teammates. “Jesus was always happy,” she said. “If you live your life sad or unhappy all the time, you are not going to live a good life. I just try to stay happy, focused and above myself and I try to be a friend to everyone. That attitude helps me a lot.”

“My personality definitely contributes to the team,” she added. “Most of the time I am joking around, and the other girls on the team probably think I am the biggest clown on the team. Sometimes I get things started. Being a joker helps me out a whole lot and I think it helps everyone else out too.”

Leah Roper faith, personality and special attributes make her a valuable member of Clemson’s team. Complimented with her scoring, rebounding and defending ability, Leah also becomes a formidable opponent for the Lady Tigers’ ACC counterparts. She also emphasizes how important her family is and says that the guidance and support they offer her is phenomenal.

“I have a very loving family,” she said. “After every home game, they try to get as many people together as they can from the Orange Brigade to pray. They come to all of our home games and I cannot explain how much I love them.”