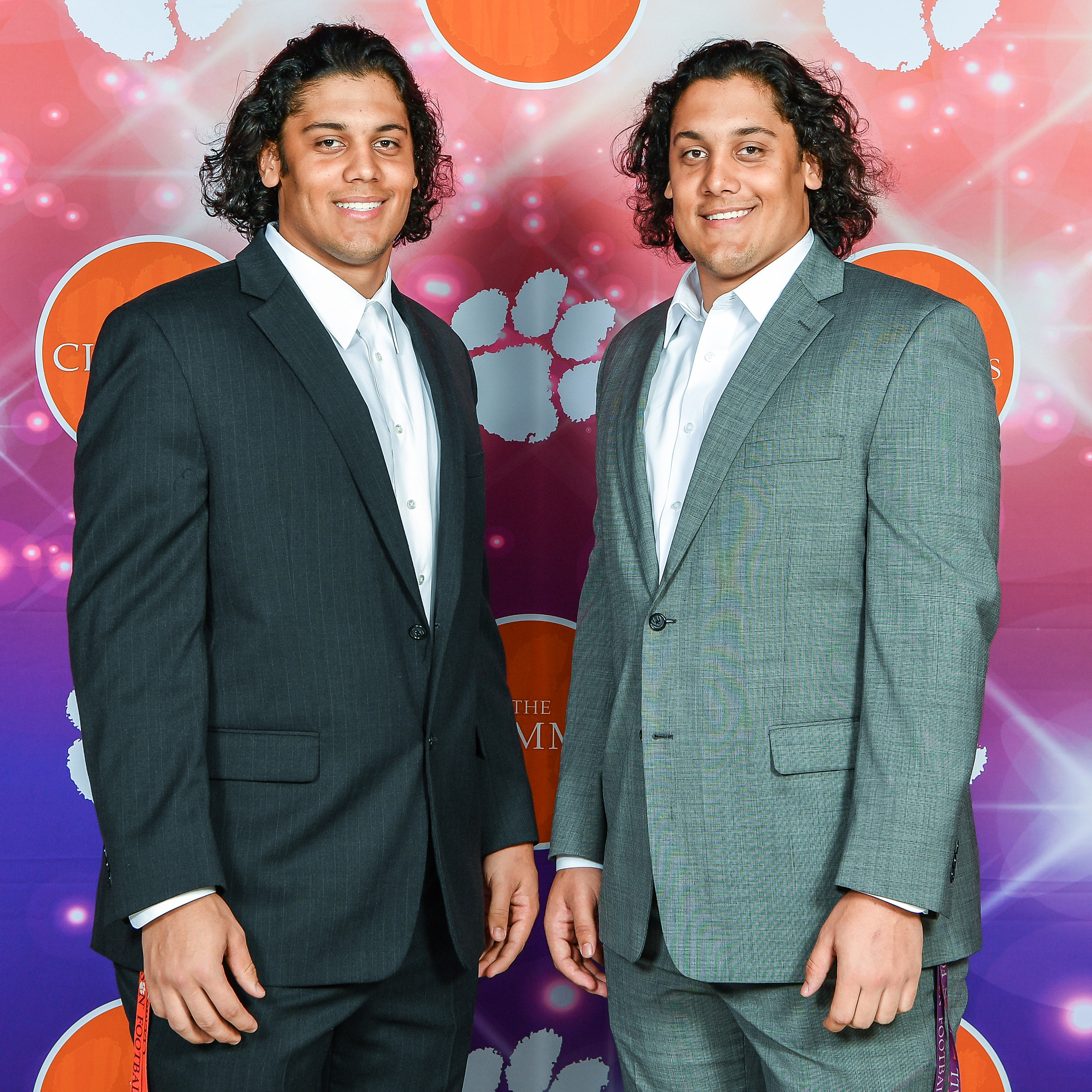 For Kaleb Bevelle, going to a Division I school was the ultimate goal. Though he had to choose between Clemson and schools in his home state of Florida, he credited his visit and the knowledge of his father playing football at Alabama with head coach Dabo Swinney as some of the reasons he chose the Tigers.

“I knew I wanted to go D-I. It was either staying home and trying to go walk on to another school in Florida, or go to Clemson. I already knew that coach Swinney played with my dad, and I came up here for a visit for the high school camps for years out of high school. I knew I wanted to come here.”

Bevelle’s connections with Clemson extend beyond his father being Swinney’s former teammate. He also plays on the team with his identical twin brother, Kelby, an experience that Kaleb enjoys.

“Not many people get to say they can play with their brother, especially at the collegiate level, so I thought that was always cool. Everyone asks us, ‘Is it cool? Do you like your brother? Are you guys best friends?’

“He’s been my roommate and we played the same position all throughout high school, except in high school, I actually played offense and he played defense. It’s reversed now.”

He also noted that there’s a little sibling rivalry between them, but it helps make the experience more fun.

“I hate going against Kelby, because he knows my moves. It’s good because I can go home and talk crap to him when I win, and then when he gets me, I’ll get mad about it. It makes it better.”

Bevelle stated that he is a “people person,” and that he likes talking to people and networking. The sports communication major would like to pursue a career in broadcasting or entrepreneurship, and he added that coaching was a potential option.

Like his identical twin brother, Kaleb, Kelby Bevelle credited his visits to Clemson and his father being a former teammate of head coach Dabo Swinney as major reasons he chose the Tigers.

“We came to Clemson during our sophomore and junior years of high school for camps, and we loved the atmosphere. Our dad went to Alabama with coach Swinney, so there’s a lot of coaches who he played with.

“It’s always been our dream. We’ve always wanted to do something big together because you don’t really see twin brothers going to the same school, doing the same thing, accomplishing the same dream.”

Though arguing with one another at times, they are best friends, speaking highly of their relationship.

“We are best friends. We argue a lot, but in the end, everyone can tell we’re always together. We’re never apart. We’re inseparable.”

He also echoed his brother’s notion of a sibling rivalry existing between them.

“We’re very competitive, especially with me being on offense and him defense. So we give each other a lot of trash talk.”

He explained that Robbie Caldwell is the coach who has influenced him the most during his time as a Tiger.

“I’d say coach Caldwell, definitely. As my position coach, he’s a hard, old-school kind of guy. He loves you in the end and he’s a cool guy.”

After graduation, he wants to assess all his options.

“I plan on attending pro day, so we’ll probably stay up here and train and try out pro day and see if something comes out of that.”

After that, Bevelle echoed his brother’s sentiments of going down either the broadcasting or entrepreneurial career paths.

Placekicker Drew Costa is new to the team, joining the roster in October, but he is not new to the school. He is a fifth-year senior, and he noted that attending Clemson was an easy choice for him to make.

“It’s a family school. My granddad and my uncle always had us as Clemson fans. My uncle studied civil engineering here. I was always a fan, and I wanted to study engineering.”

Costa knew he was always going to attend Clemson, regardless of whether he played football. However, he did try out during his freshman and sophomore years.

“I did decently well, but I got hurt, and so that actually caused me to not be able to come onto the team. I got rehab taken care of, including surgery, and then came back out for one more tryout and did well. But all the kickers on the team were younger than me, so I knew there wasn’t really a spot.”

Costa was available in case of an injury, and he got the call from head coach Dabo Swinney to join the team after placekicker Greg Huegel tore his ACL. His experience of joining the team was unexpected and fast-paced.

“It was a little weird. I had some projects and tests due within two days, so I was focused so much on that, almost to a hysterical point. And then after all those tests were done, during my last class of the day, I got a call when I was walking out of the classroom.

“‘Hey, how rusty are you? Can you come in tomorrow and talk to us?’ A couple of days later, we’re already working on eligibility.”

The transition from a student and fan to a player has been fun, but it’s also been a big adjustment, especially balancing his class schedule. His reception to the team was welcoming, and overall, the process has been fun.

“I grew up in and around Clemson (in nearby Central) and always loved the small-town feel. I went to home games and knew I wanted to go here one day.”

His younger brother, Carter, is also on the team as a wide receiver, and he enjoys being on the team with his brother.

“It is really awesome. We play different positions, so it is always cool to see him competing and working hard each day.”

However, they have a competitive streak despite the different positions.

“Our relationship is a competitive relationship. We grew up playing sports together and have always been competing to be better than each other.

“We battle in the weight room to be the strongest. He has me on squat and power clean, but I have him on bench.”

Groomes has fond memories of his time at Clemson, one of which being his first appearance in a Tiger football game, which came during the 2015 season opener against Wofford. It was “a dream come true.”

He is also a long-time golfer outside of football, playing since he was as young as two years old.

“I played golf competitively for a long time. The first time I swung a club was at two. I won the region my freshman year of high school and qualified for the state amateur as a freshman and sophomore.”

The placekicker’s love for golf continues, as it is still a favorite hobby of his outside of football.

“I also enjoy the tee-time group we have at the football facility. We also play putt-putt almost every day before meetings or practice.”

He is currently looking for a job in marketing or sales, and he wants to qualify for the World Long Drive Championship this coming spring and summer.

Connor Sekas, a linebacker from Vienna, Va., had multiple reasons to attend Clemson. The biggest, however, were his brother and the construction science & management program.

“That’s kind of a long story. My dad has been in construction and a homebuilder for 30 years, so we’ve grown up in a construction family. The first thing that my brother, who’s three years older than me, and I were looking into were schools that had good construction science & management programs. Clemson was one of those. We came and visited a bunch of schools on the East coast. We both fell in love with Clemson.”

Sekas visited his brother some while his brother attended, and he fell in love with the school even more. He spent a year with his brother at Clemson, which he also noted as a fun experience.

Football was a secondary factor for Sekas, as he didn’t think about playing at first, but having a good team helped.

“At the time, I wasn’t really thinking about playing football because I had to walk on my sophomore year. It was also good to have a school with a really good football team, too. It was a benefit.”

Walking on to the team was actually a big adjustment, but ultimately it was a beneficial change.

“It was honestly a really big adjustment. I walked on my sophomore year, fall semester, but I didn’t get added to the team until the spring semester. So being a college student for three semesters and then becoming a student-athlete was a major change in my life.

“It was probably the most beneficial thing that’s ever happened to me, getting to stand on my own two feet. It really allowed me to get my life in order.”

After graduation, Sekas would like to go back home to Virginia and join his brother, working with his father’s construction company.

For most Clemson students, the term “Clemson family” is figurative. However, for wide receiver Jack Swinney, nephew of head coach Dabo Swinney, it is literal and a major reason he chose to attend the school.

“It was family. I actually, believe it or not, was gonna go to Alabama. But I came here because I have a bunch of family who’s a part of the program and live up here.”

Swinney’s uncle has been his most influential coach during his time at Clemson.

“He’s the main reason why I’m here, including the advice he’s been giving me. He’s basically like a second father to me. He hasn’t quit on me. He’s been helping me. He’s given me chances, and all the lessons I’ve learned from him are incredible lessons.”

Playing for his uncle is a dream, but it’s not as easy as one might think it to be.

“It really was a dream come true. The best part is most people think when you play for a family member, it’s going to be easy…‘he’s going to help you out here and there.’

“Not in the slightest. I don’t know how other programs do it with having family on the team, but with coach Swinney, it’s not an easy path. You earn every way. And if anything, when I make a mistake, I hear more of it.”

The expectations are higher under his uncle because he’s family, and there’s more pressure. But it’s all worth it in the end because it is what Swinney wanted, and the lessons he’s learning are worthwhile.

After graduation, he plans to stay at Clemson and earn his master’s degree in either history or athletic leadership, and then go to law school for sports law to become an agent. He also would like to pursue coaching on the side.