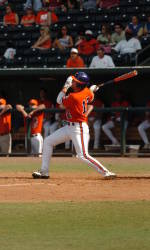 Lefty reliever Rob Catapano (2-0) earned the win for the Tar Heels. In 1.1 scoreless innings pitched, he allowed just one hit with one strikeout. Brian Moran retired the last batter of the game to record his first save of the season.

Tiger starter Graham Stoneburner (0-1) pitched 7.2 innings and allowed four runs (one earned) on 10 hits while walking two and striking out three to take the loss.

The Tar Heels took a 3-0 lead in the first inning when Seager hit a two-out, three-run homer over the right-field fence. The runs, all unearned, came after a costly Tiger error.

The Tigers responded with two runs in the bottom of the first inning. Mike Freeman singled to lead off the frame and scored on a double to left-center by Wilson Boyd. Boyd then moved to third on a sacrifice bunt by Doug Hogan. Then with two outs, Boyd scored on a passed ball.

With two outs in the fifth inning, Seager hit his second home run of the game, a solo shot, to put the Tar Heels ahead 4-2. It was also his fifth long ball of the season.

Chris Epps and Freeman led off the bottom of the fifth inning with back-to-back singles. Boyd put both runners into scoring position with a sacrifice bunt. Epps then scored on a sacrifice fly by Hogan.

The Tigers had a golden opportunity to even the score in the seventh inning. Epps, the leadoff batter, reached and went to second on a dropped flyball. Epps moved to third and Freeman reached when Mark Fleury booted Freeman’s sacrifice bunt, putting runners on the corners with no outs. But the next to batters were retired. Two batters later with the bases loaded, Jeff Schaus flied out to left to end the threat.

Clemson again had two at-bats with a runner on second base in the ninth inning, but the Tigers came up empty. Clemson was 0-for-10 with runners in scoring position in the contest.

Clemson and North Carolina will play the series-finale on Sunday at 1:00 PM.