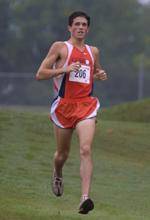 Shaw also claimed the South Carolina State Championships individual crown for the second-straight year, leading the Tigers to their third consecutive state title. He also earned all-state honors for his performance. This is the second ACC Performer of the Week accolade for Shaw this year as he received the honor the week of Sept. 3 following his fourth-place finish at the Appalachian State Mountaineer Open.