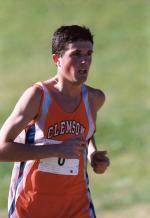 Clemson’s Scott Shaw was tabbed the Atlantic Coast Conference men’s cross country Performer of the Week as announced by the conference office. The senior from East Syracuse, NY, earned the accolade after leading the Tigers to the Western Carolina Invitational team title. Shaw won the individual race with a time of 24:20 over the 8K course, and Clemson won the meet with 23 points, defeating Georgia, the preseason favorite in the South Region poll. The Tigers were picked fifth in the Southeast Region preseason poll.