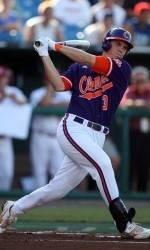 Rising senior outfielder Jeff Schaus was named a preseason second-team All-American by NCBWA on Wednesday. The Naples, FL native is a career .319 hitter in 195 games over the last three seasons. He also has totaled 170 runs, 237 hits, 41 doubles, four triples, 31 homers, 168 RBIs, a .411 on-base percentage, and 22 steals in his career. Schaus is a two-time All-ACC selection and has never missed a game in his college career.

In 2010, Schaus was a Second-Team All-ACC selection after hitting .320 with 15 homers, 14 doubles, two triples, and 87 RBIs in 70 games. His 87 RBIs tied for second-most in Clemson history and were fourth-most in the nation, including most in the ACC (next closest had 78), in 2010. He was instrumental in leading Clemson to the 2010 College World Series, as he was named to the Auburn Regional All-Tournament team and later was 9-for-15 (.600) with two doubles and five RBIs in three Clemson Super Regional games. After the season, he was drafted in the 27th round by the Cleveland Indians, but he elected to return for his senior season.