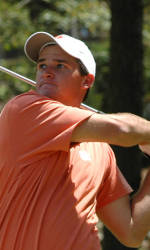 Clemson, SC – Clemson junior Sam Saunders shot a 36-hole score of 130 to win the US Amateur qualifier at Haines City, FL by an incredible 14 shots on Tuesday. Saunders had rounds of 63-67 for a 14-under par total, giving him the 14-stroke win over Mariel Ahmad Fauzi of Malaysia and Michael Villilio of Winter Park, FL.

The qualifier was held at the Southern Dunes Golf and Country Club of Haines City, FL. Saunders shot a nine under par 63 on Monday when he had seven birdies, two eagles and two bogeys. He had a birdie putt on the last hole that could have tied the course record of 62, which is held by former Clemson All-American Danny Ellis, a native of Haines City, FL.

Saunders came back with a five under par 67 on Tuesday, a round in which he had seven birdies and two bogeys. Saunders will make his first trip to Pinehurst #2 on August 18-24 for the US Amateur. He joins Clemson teammates Phillip Mollica and Kyle Stanley in the field.

Saunders, a native of Windermere, FL, ranked second on the Clemson team in stroke average this past year. He was named a first-team All-Regional selection after leading Clemson to a third place finish at the NCAA West Region Tournament in Washington.