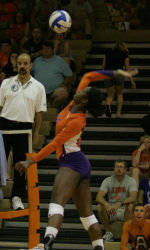 GREENSBORO, NC – Clemson sophomore middle hitter Sandra Adeleye has been named to the 2010 Volleyball All-ACC team as announced by the conference on Wednesday. Freshmen Hannah Brenner and Mo Simmons were also honored as members of the ACC All-Freshman team.

For Adeleye, it is her second All-ACC honor, as she was named to the team last season as a freshman. She was also a 2009 All-Freshman team selection and AVCA East Region Rookie of the Year. Adeleye is the 40th All-ACC selection under head coach Jolene Jordan Hoover. She also joins Didem Ege as the only two players in Clemson history to be named to the All-ACC team in their freshman and sophomore seasons.

Adeleye is ranked fourth in the conference with a 3.43 kills/set average and a 4.11 points/set average, and ranks third in the ACC in blocking at 1.11 per set. Adeleye had double-digit kills in 16 straight matches and in 27 of 30 matches overall. She has posted a career-high nine blocks in three different matches as well.

Simmons and Brenner each earn their first career honor, and give the Tigers more than one All-Freshman team selection for only the fourth time in school history. Adeleye and Alexa Rand were each named to the team a season ago. Clemson is the only school with two All-Freshman selections, and the Clemson duo is the 17th and 18th All-Freshman selections under Hoover’s watch.

Clemson put an extremely young team on the court in 2010, which featured only one senior and one junior, who did not play due to injury. Tiger freshmen and sophomores accounted for 1468 kills and 322.5 total blocks.

Simmons was named the ACC’s Freshman of the Week in September after leading the Clemson Classic in hitting and aces.

Brenner, a setter from Orrville, OH, ran Clemson’s offense down the stretch of the ACC season. After playing split time in the beginning of the season, Brenner took over the full-time job in early October. She averaged 9.78 assists per set, which ranked eighth in the league, and also posted 156 digs and 55 blocks.

Brenner had seven double-doubles, and her 704 assists rank as the fourth-most by a Tiger freshman in school history. Brenner was named the ACC’s Freshman of the week twice this season, with each coming in the last four weeks.