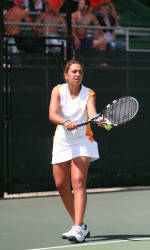 CHAPEL HILL, NC – Carol Salge and Ani Majacika of the Clemson women’s tennis team posted wins in both singles and doubles on the third day of competition at the 2006 Wilson/ITA Southeast Regional in Chapel Hill, NC on Saturday. Salge and Majacika will compete in the quarterfinals of the singles draw and as a pair in the doubles quarterfinals on Sunday at the Cone-Kenfield Tennis Center on the campus of the University of North Carolina.

In the singles competition on Saturday, Salge, one of the tournament’s 5-8 seeds, defeated Vanderbilt’s Amanda Taylor by a score of 6-1, 6-3 in the Round of 32. In the Round of 16, the junior from San Roque, Brazil won a 6-3, 6-4 decision over Liz Plotkin of Duke. Salge will meet Hala Sufi of Middle Tennessee State in the quarterfinals of the singles draw on Sunday.

Majacika, a freshman from Makarska, Croatia, won by default when Sierra Poske of Wake Forest retired with an injury in the Round of 32. Majacika, a 9-16 seed, upset 5-8-seeded Katrina Tsang of North Carolina (7-5, 6-4) to reach Sunday’s quarterfinal round, where she will face Tennessee’s Blakely Griffith.

Clemson freshman Selma Babic dropped her match in the Round of 32 to Austin Smith of North Carolina. Smith, a 9-16 seed, defeated Babic by a score of 6-2, 6-1.

In the doubles Round of 16, Majacika and Salge, a 5-8 seed won an 8-6 decision over Amanda Granson and Tory Zawacki of Duke. With the win, the pair advances to the quarterfinal round of the doubles draw on Sunday and will face Wake Forest’s team of Ashlee Davis and Sasha Kulikova.

Clemson senior Maria Brito and sophomore Andrea Luc faced the fourth-seeded doubles team in the tournament in Kim Coventry and Joelle Schwenk of Kentucky. Brito (Mexico City, Mexico) and Luc (Paris, France) fell to the Wildcat team by a score of 8-3.