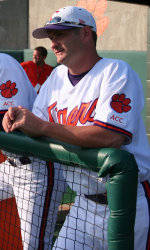 NEWBERRY, SC – Newberry College athletics director Brad Edwards introduced Russell Triplett as the College’s baseball coach in a press conference on campus Monday. Triplett has served the last four seasons as an assistant coach at USC Upstate after a year as a volunteer assistant at Clemson.

“To say we are excited about having someone the caliber of Russell Triplett take the reins as head coach of our baseball program is an understatement,” Edwards said. “He has excelled at every level as a player and as a coach. You must be special to have the endorsement of the head baseball coaches from South Carolina, Clemson, the College of Charleston and Charleston Southern. Russell Triplett is South Carolina baseball.”

“I’m thankful for the opportunity Newberry College has given me to serve as head baseball coach,” Triplett said. “I’m excited to join the Newberry family and I look forward to the challenges that lay ahead as we take the baseball program to the next level.”

In his first three seasons with the Spartans, Triplett recruited three players that have gone on to receive postseason freshman awards, with two earning Atlantic Sun Conference All-Freshman Team nods and another earning Ping! Freshman Team honors. In 2009, the Spartans infused three freshmen into the everyday lineup and two more entered the weekend rotation, with Austin Moyer earning A-Sun All-Freshman honors. In his second year, the Spartans infused three freshmen into the everyday lineup, the Spartans won 25 games in their first season of Division I play and finished in fifth place with a 17-16 record in the 12-team Atlantic Sun Conference. Along the way, two of Triplett’s first signees, Blake Green and Keith Bisgounis, earned some attention with Green taking a slot on the Atlantic Sun All-Freshman Team and Bisgounis earning Honorable Mention Ping! Freshman Team honors.

In his first year with Upstate, Triplett immediately helped the Spartans to a 34-win season, helping the team hit .289 during the season. The Spartans reached a DII national ranking as high as 18th and posted a school-record 15 Peach Belt Conference wins.

Triplett went to Upatate after a year as a coach at Clemson University where he was a Volunteer Assistant on the Tiger coaching staff. He was responsible for working with the hitters and infielders, as well as serving as the first base coach. He was part of the coaching staff that led the Tigers to an appearance in the 2006 College World Series in Omaha, Neb. Clemson claimed the Regional and Super Regional Championships, and won the regular season and ACC Tournament titles. He also coordinated the hiring of the winter and summer baseball camp staff and assisted with the organization of the camps.

In addition to his experience working at Clemson, Triplett has served as a professional baseball instructor at the Blue Chip Baseball Academy.

Triplett was a standout player and four-time letterman at Clemson from 2000-04, earning his bachelor’s degree in Elementary Education. He served as a Team Captain his junior and senior seasons. He redshirted his first year at Clemson in 2000 and played in 37 games as a freshman in 2001. He had a breakout season as a sophomore in 2002, earning Second Team All-ACC honors as a utility player. He hit .301 in 58 games and helped lead the Tigers to an appearance in the College World Series and a third-place finish in the nation.

Triplett took over the reins at shortstop as a junior in 2003, earning his second consecutive Second Team All-ACC selection. He hit .335 with seven home runs, 32 RBIs and a .414 on-base percentage. He hit .304 with 17 doubles, four home runs and 41 RBIs as a senior in 2004 and was the only Tiger to play in and start all 65 games.

Triplett played in the New York Mets organization in 2004 and 2005. After playing for the Kingsport Mets (Rookie League) and Brooklyn Cyclones (Short Season A) in 2004, he was promoted to Single-A Hagerstown to start the 2005 season. He moved up to Double-A Binghamton during the summer, hitting a combined .286 with 15 doubles, four home runs and 25 RBIs with Hagerstown and Binghamton.