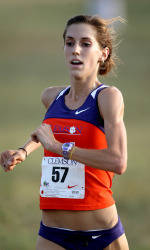 CLEMSON, SC – The cross country program played host to the Clemson Invitational, the school’s first home meet since 2006, on Friday evening at Musser Farms. It was a successful one for Kim Ruck and the Tiger women’s team, as she collected the top individual honors and led Clemson to a convincing victory in her first race of the 2010 season. The men’s team, racing with a partial squad for the second straight meet, finished third Friday.

“Kim came out and established the tone early in the race, and her teammates fed off her energy,” said Lawrence Johnson, Clemson’s Director of Track & Field and Cross Country. “We’re striving to get this program into contention for not only an ACC championship, but also a bid to the NCAA Championships as well. Hopefully, this meet was a great sign of things to come.”

The Clemson women totaled 24 points, easily outdistancing Charlotte who was runner-up with 55. USC Upstate took third in the team race with 97 points.

Ruck took off up the hill for the start of the women’s 5K shortly after 6:15 PM, and by the time she reached the top, she was alone in the lead and never looked back. She dominated the race and won by nearly a minute against a field of 87 collegiate runners. Ruck, an All-ACC and all-region performer last fall in cross country, established her personal best in the 5K with a sizzling time of 16:47.09. Joan Tangwar of USC Upstate was her closest foe at 17:38.14.

“I like to start out fast and get one of the top positions,” Ruck said. “It felt good to stay in the lead. It was a long day building up to our first home meet, but I felt good and it was awesome to see how well the entire team performed today.”

Alyssa Kulik also put together a solid run on Friday. The junior from nearby Simpsonville, SC posted a time of 17:40.65 and placed third overall. Stephanie Buffo, one of the team’s senior leaders, was fifth overall after crossing the line with a time of 17:53.88. Elyse Borisko (18:03.72) and Sarah Turman (18:05.82), Clemson’s top two finishers at the season opener two weeks ago, were the final two scorers for the Tigers on Friday.

In the men’s 8K, Davidson won the team title with a total of 28 points. Charlotte (59) held off host Clemson, who tallied 62 points despite being without the services of a few key contributors.

Ty McCormack did not disappoint in his home debut as a Clemson Tiger. The freshman sensation from Gainesville, GA followed his 5K victory at the Gamecock Invitational on Sept. 3 with a third-place showing Friday. He posted a time of 24:55.22 in his first 8,000m race, an outstanding time for a freshman.

“It’s definitely a learning experience, getting used to the distance,” he said. “It was a pretty tough course out there, so I was pleased with the time. I just went out and tried to give 110 percent for my team.”

Chris Slate was the second-best performer Friday for the Tiger men’s squad. The Delaware native was 10th with a time of 25:49.87, as he sprinted past a Charlotte runner in the final 100 meters to score a top-10 finish. Blake Kennedy was 12th with a time of 25:59.32. Rounding out the Tigers’ scoring effort on Friday was senior Chad Holt (26:12.16) and freshman Nathan Hendershot (26:27), finishing 16th and 23rd, respectively.

The teams return to action on Friday, Oct. 1 at the Charlotte Invitational. Ruck is the defending individual champion of the event.