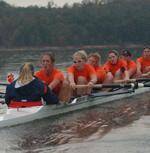 Clemson rowing returns to Oak Ridge, TN to participate in the 2004 Lexus Central/South Region Sprints on Melton Lake over May 15-16. This will be the sixth appearance at this regional competition for the Tigers. The event will feature 23 teams from the Central and South regions, including eight squads ranked in the USRowing/Collegiate Rowing Coaches Association Varsity Eight Poll, who are competing for a bid the National Championships May 28-30 in Sacramento, CA.

Last year, Clemson rowing finished fourth in the South Region and 9th overall in the team standings. In the previous four years, the Tigers have had all top ten finishes at the Sprints, including two fourth place finishes in 1999 and 2000, sixth in 2001 and seventh in 2002.