CLEMSON, S.C. – The Clemson rowing program released its 2018-2019 season competition schedule on Monday. The Tigers’ schedule includes trips to regattas in New Jersey and Florida during the Spring 2019 campaign.

“We are looking forward to a great 2018-2019 racing season,” head coach Stephen Frazier Wong said. “With the graduation of 21 seniors last year and addition of 15 freshmen this year, the team will have a vastly different look. However, we plan to use that new energy to keep improving and striving to take Clemson rowing to the next level.

“Every race we have is the most important one on our schedule, but we have increased to five the number of championship style races that we will be attending this year. These races, the Cardinal Invite, Cooper Sprints, Sunshine State Invitational, Clemson Invitational and Lake Wheeler Sprints, all have either a multiple race format or a heat or semi-final to final progression. This format is helpful to prepare our team for that same progression in the ACC and the NCAA Championships. It will also allow our young team to gain much needed collegiate racing experience.”

The Tigers kick off racing in Chattanooga, Tenn. with the Head of the Hooch regatta on Nov. 3-4. Last season, the team saw success at the regatta, bringing home 6 medals and the ACC Team Trophy.

Head racing concludes with a trip up north to Charlottesville, Va. for the Rivanna Romp, hosted by the University of Virginia. Racing will take place on Nov. 11 on the Rivanna Reservoir.

The Tigers begin the spring racing season on Lake Hartwell as they host North Carolina and Duke University for the annual Carolina Cup. Following the Carolina Cup, the team will travel to Oak Ridge, Tenn. for the Cardinal Invitational on March 16-17.

The season is highlighted by trips to New Jersey and Florida for the Cooper Sprints on March 24 and the Sunshine State Invite on April 5-6.

Racing returns to Lake Hartwell on April 19-20 when the Tigers play host to 20 teams for the Clemson Invitational, one of the largest Division I collegiate regattas. Last year, the regatta included 21 teams from 17 states and 8 different athletic conferences. A week after the Invitational, the Tigers will travel to Raleigh, N.C. for the Lake Wheeler Sprints.

Spring racing concludes with the ACC Championships at Lake Hartwell on May 17-18. This year, the championship will return to a two-day format with heats the first day, followed by finals on the second day. 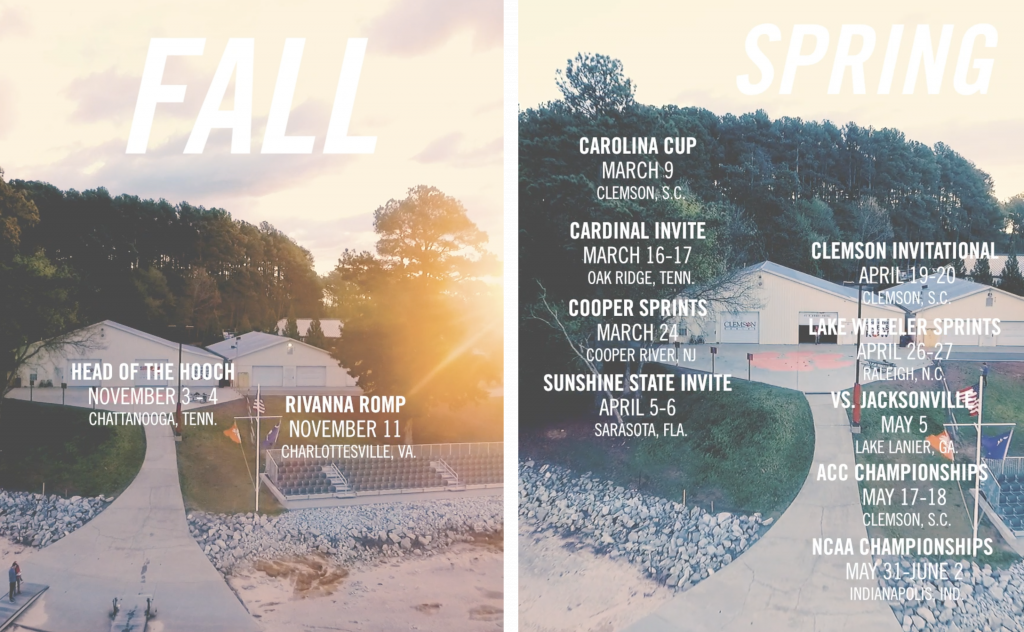