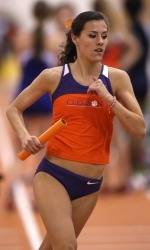 BLACKSBURG, VA – Defending national champion Brianna Rollins automatically qualified for the 60-meter hurdles at the upcoming NCAA Indoor Championships on Friday at the Virginia Tech Invitational, held at the Hokies’ Rector Field House. Rollins’ individual crown was one of six for the Tiger track & field program Friday as they resumed the 2011-12 indoor season.

Rollins was sharp in both the preliminary round and the final, clocking an 8.07 in the latter to surpass the national automatic standard of 8.14. Rollins ran 7.96 at last season’s NCAA Championships en route to the national title as a sophomore. She was followed by Bridgette Owens, a sophomore, who crossed the finish line in 8.21. Keni Harrison, a freshman, was fifth after an opening round 8.35 earlier in the day.

Other female winners Friday for the Tigers were Dezerea Bryant in the 300 meters, Marlena Wesh in the 500, Alyssa Kulik in the 1000, and Brittney Waller in the 20-pound weight throw.

Bryant won the 300-meter dash with a time of 37.90, matching the school record set by Rollins in 2010, when she was also a freshman. Bryant is one of the nation’s top freshman sprinters. Wesh won the 500-meter run with ease Friday. The native of the state of Virginia fared well in her return home, clocking a time of 1:11.82 to finish tops among 26 competitors. Her effort improved by roughly half a second over her school-record time from the first meet of the season, the Orange & Purple Winter Classic.

Kulik put together an outstanding time in the 1000-meter run, finishing with a school record 2:52.46. The senior from Simpsonville, SC bested the previous Tiger standard by more than five seconds. Her close friend Kim Ruck was runner-up in the mile, as the Clemson graduate posted a time of 4:57.28 to start her final indoor season for the Tigers.

Stormy Kendrick was runner-up in the women’s 60-meter dash. The junior from Gastonia, NC had a time of 7.32 in the final, but was edged by Octavious Freeman of UCF. Kendrick was also third place in the 300. Bryant did well and finished third with a 7.38 through both rounds Friday.

In the field, Waller recorded a season-best mark in the weight throw while earning the victory. The junior out of J.L. Mann High School in nearby Greenville, SC hit a mark of 62’5″, safely putting her ahead of a pair of throwers from NC State.

On the men’s side, Clemson went 1-2 in the 1000-meter run. The Tigers also produced runner-up finishers in the 60-meter dash and 60-meter hurdles.

Nathan Hendershot, a sophomore from Pendleton, IN, won the 1000 with a time of 2:27.6, one of the top five times on record in the event by a Clemson male. Two-time All-ACC runner Chris Slate was runner-up, but won his section with a time of 2:28.53.

Justin Murdock, a senior from Pasadena, MD, was second place in the 60 dash. He produced a solid time in his first 60 of the season, a 6.68 in the final as he finished behind home favorite Keith Ricks of Virginia Tech. In the hurdles, junior Marcus Maxey ran a 7.97 and was runner-up after favorite Spencer Adams did not finish. Adams had one of the top preliminary times at 7.85.

Murdock also competed in the 300-meter dash, where he was third overall with a time of 34.24. La’Mont Jackson finished in third place in the 500-meter run for the men’s team. He put together a time of 1:05.24 on Friday.

A pair of freshmen competed in the men’s triple jump Friday afternoon. Clemson native C.J. Davidson was the team’s top performer. He put together a top leap of 48’8″ en route to a fifth-place finish. In the weight throw, Cory Thalheimer was ninth with a mark of 50’2.75″.

The teams return to action Saturday at the Virginia Tech Invitational, beginning with the men’s high jump at 11 AM.