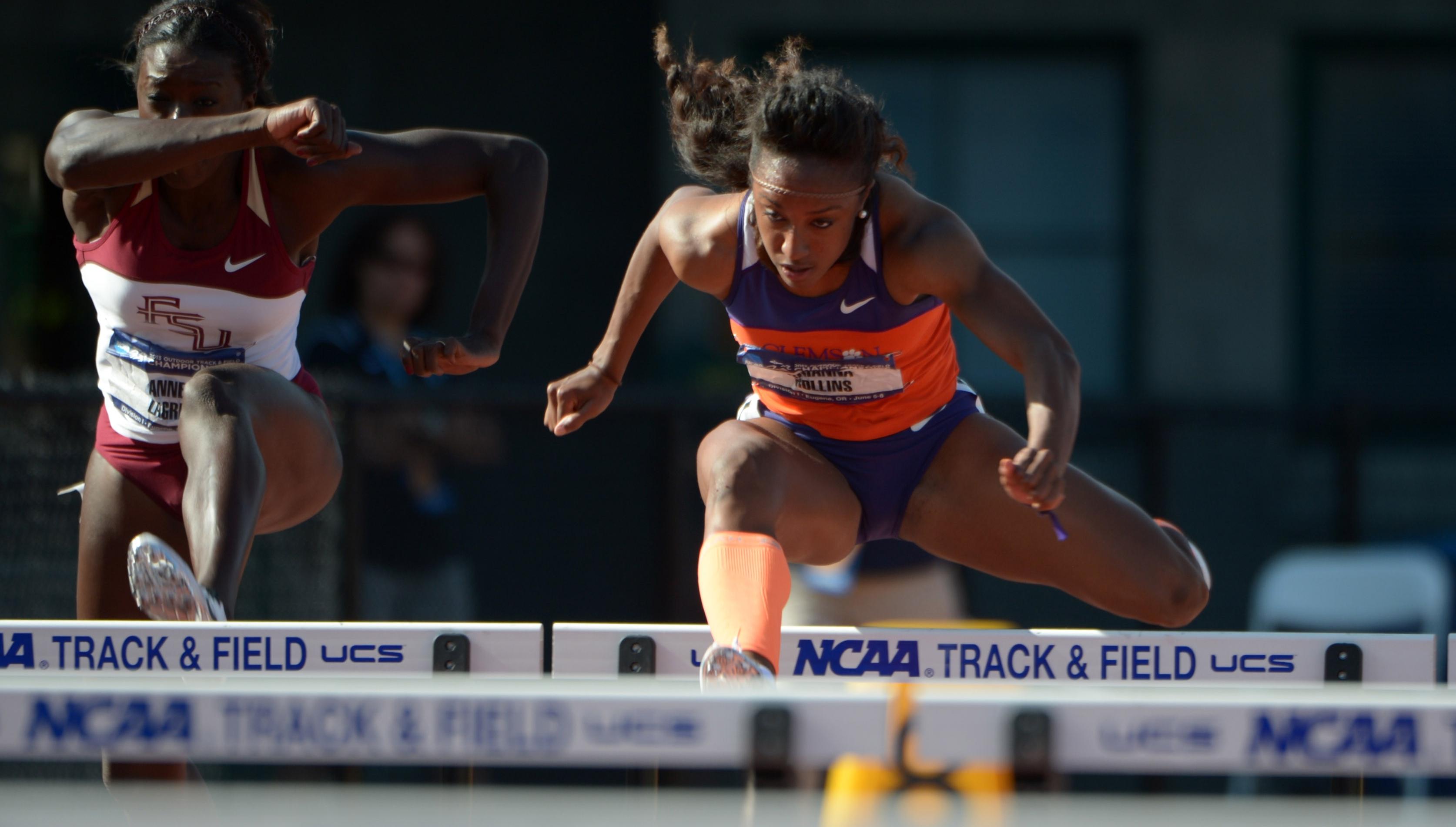 CLEMSON, SC – Sporting new colors for the first time in four years, former Clemson athlete Brianna Rollins made her professional debut Friday in Des Moines, IA at the USA Outdoor Track & Field Championships.  The Nike athlete did not disappoint the Drake Stadium crowd, running the fastest all-conditions time in the world this season. Rollins, three-time NCAA National Champion for the Tigers from 2009-13, clocked a time of 12.33 to win her heat in the qualifying round of the 100 hurdles.  It was just past the legal wind limit with a +2.3 meters per second reading, or else the time would have been a facility record.  Regardless, only two Americans – Gail Devers and Lolo Jones – have run a faster time under all conditions in the history of the event.  Jones also qualified for the semifinals of the event Friday, winning her heat in 12.50.  Queen Harrison had the second-best time overall at 12.44.  The semifinals are set for 3:25 PM ET on Saturday, with the final at 6:52 PM.  It will be televised live by the NBC Sports Network. Also on Friday, 2011 NCAA Champion Miller Moss was fifth through the first half of the decathlon with a total of 4,057 points.  The Clemson graduate’s best event was the shot put, where he put together a mark of 46’2”.  He will conclude the decathlon Saturday. Dezerea Bryant, a current sophomore on Clemson’s team, broke the Tigers’ all-time record in the women’s 100 dash.  The Wisconsin native ran in the faster of two semifinal heats and produced a time of 11.20.  She broke Stormy Kendrick’s school record of 11.23, which had stood since 2011.  Bryant did not advance, but will compete Saturday in the qualifying round of the 200 dash at 4:35 PM ET. Bryant’s close friend and classmate, Keni Harrison, placed 12th in the opening round and advanced to Saturday’s semifinals in the 400 hurdles.  Harrison posted a time of 57.08 on Friday.  The semifinals are set for 5:03 PM ET on NBC Sports Network. Mimi Land, a freshman on this year’s team, earned the bronze medal in the junior women’s long jump.  She put together a leap of 19 feet on her second attempt.  By virtue of having already hit the “A” standard earlier this season and Friday’s silver medalist yet to achieve the mark, Land was awarded the second spot on Team USA for the upcoming Pan American Junior Championships, scheduled for August in Colombia. Another freshman, Jalen Langston of the Tiger men’s squad, was seventh place after clearing 6’8.25” in the junior men’s high jump. Saturday’s action will also feature the opening round of the men’s 110 hurdles, featuring seniors Spencer Adams and Marcus Maxey in their final competition for Clemson.  The two will race at 4:10 PM ET.