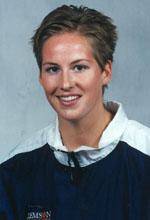 GREENSBORO, N.C. – Nineteen Atlantic Coast Conference scholar-athletes have been named recipients of the 2003 Weaver-James-Corrigan Postgraduate Scholarships, as announced by Commissioner John Swofford. The scholarships are given to selected student-athletes who intend to pursue a graduate-level degree following graduation. Each recipient will receive $5,000 to use towards their graduate education. Student-athletes receiving the award have performed with distinction both in the classroom and in their respective sports, while demonstrating exemplary conduct in the community.

In addition to those receiving scholarship funds, there will be four student-athletes receiving Weaver-James-Corrigan Honorary Awards. These students will be recognized for their outstanding performance both in athletic competition, as well as in the classroom throughout their collegiate careers and who intend to compete in their respective sports at the Olympic or professional level.

The award is named in honor of the late Jim Weaver and Bob James as well as Gene Corrigan, past ACC commissioners. The league’s first commissioner, James H. Weaver, served the conference from 1954 to 1970, after a stint as the director of athletics at Wake Forest University. His early leadership and uncompromising integrity is largely responsible for the excellent reputation enjoyed by the ACC today.

Bob James, a former University of Maryland football player, was named commissioner in 1971 and served for 16 years. During his tenure, the league continued to grow in stature and became recognized as a national leader in athletics and academics, winning 23 national championships and maintaining standards of excellence in the classroom.

Prior to 1994, the Weaver-James postgraduate scholarships were given as separate honors. The Jim Weaver award, originated in 1970, recognized exceptional achievement on the playing field and in the classroom, while the Bob James award, beginning in 1987, also honored outstanding student-athletes.

Georgia Tech, North Carolina and Wake Forest led the conference in selections this year with a total of three apiece. Clemson, Duke, Florida State and NC State had two student-athletes selected while Maryland and Virginia each had one representative on the list of honorees.

The 23 student-athletes will be honored Friday, April 11, 2003, in Greensboro, N.C., at a luncheon hosted by the Nat Greene Kiwanis. The luncheon will be held in the Empire Room at the Elm Street Center on South Elm Street.

Jenna Kirsten Burtch, Clemson University, Swimming, Holland, Mich. Earned Honorable Mention All-America honors in 2002 for the 400 medley relay…Three-time ACC Champion as a member of the Tigers’ winning 200 medley and 200 and 400 free relay teams in 2002…Named to the All-ACC team in 2001 and 2002 and was a member of the ACC Honor Roll in 2000, 2001 and 2002…Maintained a 4.0 GPA in Psychology during her career at Clemson…Currently holds the second-fastest times in Clemson history in the 50 and 100 free and the fourth-fastest time in the 200 free…Member of the 200 and 400 free relay teams and the 200 and 400 medley relay teams that hold the fastest times in the Tiger recordbooks.

Jackie J. Robinson, Clemson University, Football, Orangeburg, S.C. Served as president of the team’s LIFELINE Organization, the team’s leadership group…Consistent Dean’s List Student, Robinson has made the ACC Academic Honor Roll each of the last four years and should be the football team’s first five-time selection in seven years…Played his final season on the gridiron as a graduate student, as he earned his degree in health science in December of 2001…Caught 18 passes for 229 yards this past season, fourth on the Tiger team in receptions…For his career, Robinson caught 53 passes for 637 yards and four scores…Played in 43 games, 28 as a starter, and four bowl games.