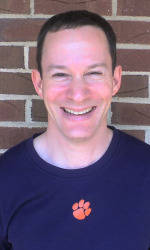 “Coach Tenenbaum is the missing ingredient needed to become an elite program year in and year out,” said Clemson Head Coach Richard Ruggieri. “His knowledge, positive attitude and ability to support the philosophy of Clemson Rowing and University are welcomed. I am proud to welcome Coach Tenenbaum to Clemson.” As the women’s varsity assistant coach, he will help Ruggieri with recruiting, and all aspects of the women’s rowing program. “I am absolutely thrilled to be here at Clemson University, stated Tenenbaum. We have a great group of women that are working very hard to be the preeminent rowing program in the nation. I am looking forward to working with Coach Ruggieri and all of the great people here in Clemson.”

Tenenbaum spent 1998-2006 at Ohio State where he earned the Collegiate Rowing Coaches Association’s (CRCA) 2006 award for Assistant Coach of the Year. That prestigious award is designed to recognize an assistant coach who had success during the recent season, while demonstrating great team improvement from the prior season, fulfilling the team’s potential and demonstrating a high level of professionalism and integrity as a coach.

He received back-to-back CRCA Central Region Assistant Coach of the Year honors in 2005 and 2006.

Primary responsibilities for Tenenbaum at Ohio State included overseeing the second varsity eight, and assisting with the varsity squad and recruiting.

Under his instruction at Ohio State, the second varsity eight boat finished fourth in the Grand Final in both the 2005 and 2006 NCAA Championships. The Buckeyes won both of their Grand Finals at the 2006 Big Ten and Central Region championships and had a seven-race win streak during the regular season.

He assisted the Junior National Team during the summers of 2000 and 2001 when the Junior Women’s four won gold and silver medals in Croatia and Germany respectively. Tenenbaum was named the head coach for the U.S. Junior National team in October 2001. His junior women’s eight won a bronze medal in Lithuania in the summer of 2002 and a silver medal at the Junior World Championships in Athens, Greece in 2003. Tenenbaum has held head coaching positions at Tulsa (1997-98), Florida Tech (1994-95), and with the Clemson Club program (1993-94) as well as being the assistant women’s coach at Tennessee from 1995-1997.

A native of Shaker Heights, Ohio, Tenenbaum earned a marketing degree from Tampa in 1992.