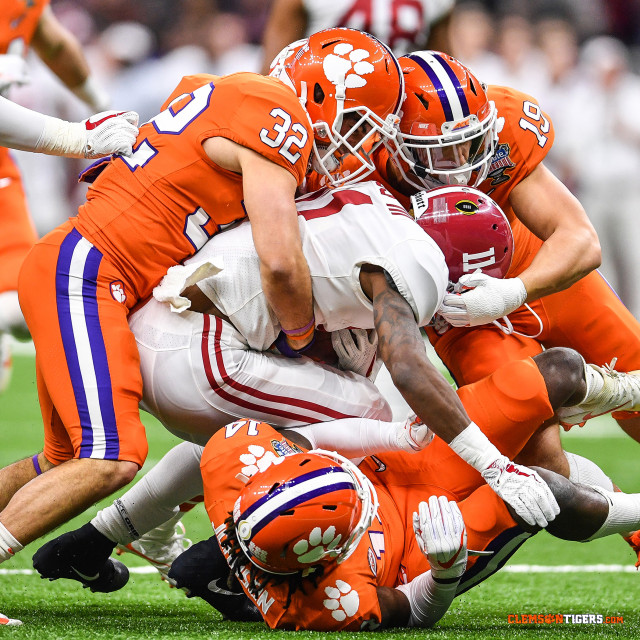 On the Sunday morning before the Monday night Sugar Bowl game between Clemson and Alabama, I went to mass at St. Louis Cathedral in the French Quarter in New Orleans, the oldest Catholic parish (1718) in the United States.

During each Catholic mass, there is a “sign of peace,” when parishioners exchange greetings, usually by saying “peace be with you.” Wearing a Clemson orange-logo sweater, I turned to exchange the greeting to a person behind me. I said, “peace be with you,” and the stranger said to my astonishment “Roll Tide.”

I was a bit taken aback and smiled before turning around. After a minute, it occurred to me that these Alabama fans were fired up to beat Clemson.

We could see from the outset of the game, it was the same case for the Crimson Tide team.

The players were wired, and it was apparent that Alabama head coach Nick Saban had not led them forget what had happened last year when the Tigers scored on a two-yard Deshaun Watson to Hunter Renfrow pass with just one second left to give Clemson a 35-31 victory and the school’s first national championship in 35 years.

It was all the Alabama team could talk about the week before Christmas and the week leading up to the game. Clemson’s 2016 season victory had stung, and the Crimson Tide were sick of hearing about it from the media, their coaches and their constituency.

Some time around the turn of the century, it became taboo to talk about sporting events as “revenge games.” I really don’t know why or what event sparked it, but from a sports information standpoint, we tell our student-athletes to stay away from the “R” word.

But when I was a student at Notre Dame in the 1970s, the revenge factor was was big and it was opening discussed. My good friend, Digger Phelps, always talked about “revenge games” with the team and the media. It was a big deal when Notre Dame ended UCLA’s 88-game winning streak in 1974.

While Dabo Swinney and his players never used the “R” word prior to the 2016 season national championship game, it was a factor. The 45-40 loss to Alabama the previous year hurt. That loss ate at Deshaun Watson and his teammates all summer and fall, and it was a motivating factor in Clemson’s 35-31 win in Tampa.

And it was again last month for Alabama.

But whatever the word you use, whatever fuels the rivalry, as long as it stays one of mutual respect, it is good for the game and good for the sport. The three games we have witnessed the last three years between Clemson and Alabama have been good for the sport. Many members of the media compared the trilogy to the Ali vs. Frazier heavyweight fights of the 1970s and the recent NBA championship finals between the Cavaliers and Warriors.

When I was on the field after the Sugar Bowl, there was no trash talking among the players, just signs of excellent sportsmanship.

As Swinney said after the game in his press conference, this won’t be the last time Clemson and Alabama meet in the playoff.

Both programs are at a high level and built for the long term, and they have both created a culture whereby young men with outstanding leadership qualities pass those qualities on to the next class.

A prime example of that leadership took place in our locker room after the Alabama loss. First-team All-American Clelin Ferrell came up to me after coach Swinney had finished his talk to the team and asked if I needed a player to represent the defense at the postgame press conference.

Wow, what a sign of leadership. I will always remember Ferrell for that.

Others will follow his lead for years to come, and it is reason this program is now among the most respected in the nation and will face the Crimson Tide again soon.