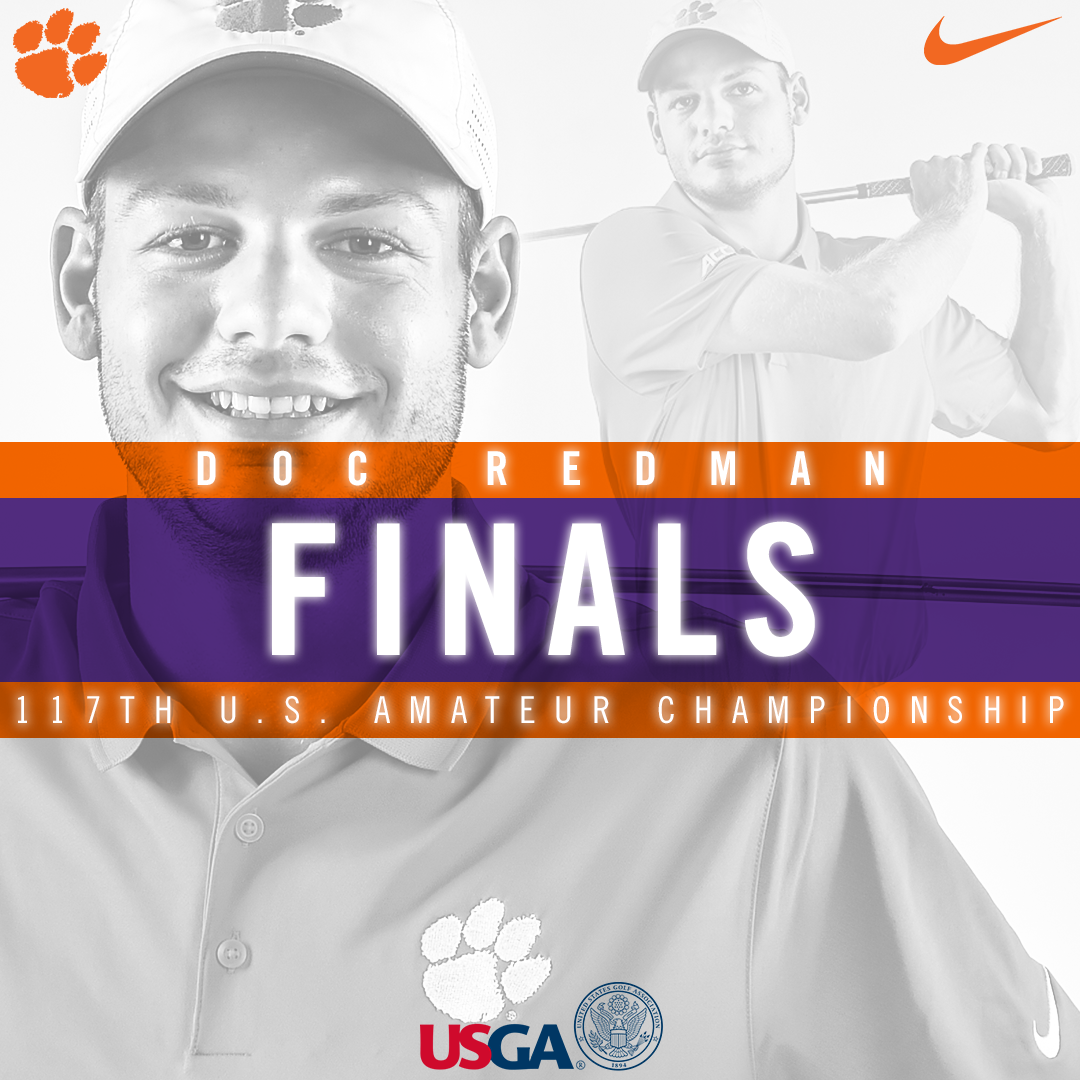 Clemson, S.C.—Doc Redman won the 18th hole to gain a 1-up victory for the second consecutive match and advanced to the finals of the 117th United States Amateur at Riviera Country Club near Los Angeles, Calif. on Saturday.   He defeated Virginia Tech golfer Mark Lawrence, Jr. to become the first Clemson golfer to reach the US Amateur finals since 2009 when Ben Martin was a finalist.

Redman will face Doug Ghim of Arlington Heights, Ill., a golfer for the University of Texas, on Sunday in a 36-hole final.   Ghim is the ninth seeded player in the field, while Redman was seeded 62nd after stroke play.   Ghim has been dominant in his five matches and has trailed for just two total holes.

Redman is the fifth Clemson golfer to reach the U.S. Amateur finals.   Parker Moore (1976), Chris Patton (1989), Danny Ellis (1993) and Ben Martin (2009) are the previous Clemson finalists. Only Patton claimed the championship a 3&1 win over Danny Green of Jackson, Tenn at Merion Country Club in Ardmore, Pa in 1989.

Lawrence and Redman played a close match on Saturday. Lawrence, a native of Richmond, Va., won the first hole, the second straight match Redman has trailed after the first hole. But the Clemson sophomore won holes three, four and five to take a 2-up lead, his largest lead in a match since a 4 & 3 win in the first round.

Lawrence and Redman trailed victories until Redman took a 2-up lead with a win on the 15th hole. It was the third time this week Redman had won the 15th hole.   But Lawrence won the 16th hole with a par, then needed an eagle to beat Redman’s birdie on 17th to square the match after 17.

With the victory, Redman earns a berth in the 2018 US Open and is likely to receive an invitation to the 2018 Masters.

“Mark and I both played great,” said Redman. “Hats off to him. He made a great eagle putt on 17 and I expected him to make the putt on 18 to keep the match going.

“I wasn’t thinking about making the US Open or the Masters when I was playing today. I just tried to stay in the moment on that hole and do what I needed to do to try to win this match.”

Coverage of the 36-hole final on Sunday starts at 12:30 pm eastern time on USGA.org. Fox Sports will begin coverage at 4:30 p.m

THE MODERATOR: We would like to welcome Doc Redman, 1-up winner over Mark Lawrence in the semifinals of the 117th U.S. Amateur.

By the look on your face it means a lot. I can tell. When you’re playing a tough match like that and then you win it on 18, tell us what you were thinking as you played that hole and how you approached the tee shot on 18 after he had squared the match.

DOC REDMAN: I approached the tee shot the same as I always had. I had a good target the whole week and I stuck with that and just tried to hit the little fade I hit down there. I had been swinging great all day, so I had a lot of the confidence in it.

I hit a great drive. That second shot is really difficult downwind. That green seems to be probably the firmest green on the course. I knew that if I could just get it to land anywhere near the hole it would stop middle of the green and wouldn’t be bad. Hit a good shot just short. He had a tough two-putt.

You know, I thought he might make that second one. It was straight up the hill and he had been putting really well. Just happened to go my way and won.

DOC REDMAN: It’s great. I’m so excited to be able to compete for the Championship tomorrow, especially after how I played in stroke play, which was horrendous. I didn’t think after I finished it I had any chance of moving on to match play.

DOC REDMAN: Yeah, it wasn’t nerve wracking. I did feel good about myself today on the green. I worked on my chipping a lot this summer. I have great confidence in it, that basically no matter where I hit it I can get up and down and make a putt.

So I was just confident.

DOC REDMAN: No, I mean, I wouldn’t say that. There is not a whole lot of dialog. I like to do my own thing. It’s also great to have him there when I’m unsure of anything.

I think most the information I want is wind just so I can commit to a number and hit it there. That’s definitely what I struggle with most, is committing.

DOC REDMAN: It’s huge. Yesterday was I think the windiest day of the week. It’s brutal out there. The course is difficult enough getting firmer, and with the wind, you turn — especially on the back nine. Those holes are so hard.

DOC REDMAN: I was honestly not too worried about it. I figured if it was meant to be it would happen. We went to the beach. We went to a Dodgers game. I was trying to chill and not really check my phone.

DOC REDMAN: It wasn’t a shock. I think, as everyone knows in golf, you can’t play well every week and stuff like that happens. It was disappointing more than anything that I didn’t play better.

I knew if I could get in match play that it would be kind of the reset button and I would be okay.

DOC REDMAN: I don’t know a lot about him. Never really met him. I know few of his teammates. I’m sure he’s a great guy, very nice. Obviously he’s a great player. He’s been playing awesome this summer.Doesn’t seem like he’s really had a close match this week either. I think he’s playing great golf and it’s going to be a fun match.

DOC REDMAN: I honestly hadn’t watched it much on television. I knew the 6, the bunker in the middle. I knew 10 ten being pretty difficult, even though it was short.

I kind of knew about 18 being the blind tee shot. Other than that, I didn’t know anything about it.

DOC REDMAN: Nothing in particular really. I just tried to hang tough. I knew that eventually I would start playing some good golf, and tried to draw on past experiences, specifically last week as well. Just trying to stay confident and comfortable. I’ve been playing well.

DOC REDMAN: No plan. I think just kind of chill out this afternoon and enjoy the afternoon, enjoy hanging with my family. That’s about it.

DOC REDMAN: Yeah, I played great in stroke play, which gave me a lot of confidence, especially because the Western Am is such a strong event. Especially it’s such a grind. I think I counted it up and I played 145 competition holes in five days.

Then I really played awesome in match play as well against some world-class opponents. Proved to myself that I could get it done.

DOC REDMAN: It was a goal of mine this summer. I tried to play in the events that were grade and I wanted to play well in them. It was a goal, but I was obviously not on the list. I knew if I could get some good tournaments in I could be up there.

Right now, I think these past two events have helped me a lot. There is no way of knowing how they feel. I’ve talked to Spider a little. Very nice guy. We’ll just see what happens.