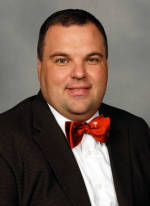 Clemson, SC – Jerome ‘Raz’ Razayeski has been named President of the South Carolina Athletic Trainers’ Association (SCATA). Razayeski, who has served as an assistant athletic trainer for Clemson since 1999, began a two-year term on July 11.

As President of SCATA, he will be responsible for several duties. Razayeski will serve as spokesperson for the Executive Council, maintain communication with the National Athletic Trainers’ Association (NATA) and South Carolina Medical Association, and serve as liaison to the DHEC Athletic Advisory Board. He is responsible for calling all meetings of the executive council, presiding over state business meetings, and appointing representatives of SCATA to allied organizations and committee. He will also be in charge of pursuing and obtaining corporate sponsorships for scholarships and expenses for the Association.

Razayeski, who holds a master’s degree from Clemson University, has been the head athletic trainer for the men’s basketball program for the last nine seasons. He will not serve in that role again for the 2008-09 season, as Director of Sports Medicine Danny Poole added two full-time assistants this month and has divided duties amongst the staff. Razayeski will concentrate on the athletic training needs for the men’s soccer program this fall.