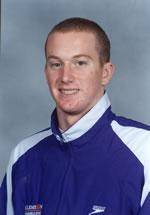 CLEMSON, SC – Clemson men’s swimmer Tommy Rappold was named to the CoSIDA Academic All-District III Men’s At-Large First Team for the 2004 season as announced by the College Sports Information Directors of America on Thursday. The junior from Roanoke, VA has recorded a cumulative grade point average of 4.0 and is majoring in Computer Information Systems. By earning first team all-district honors, Rappold will be on the ballot for the national Academic All-America At-Large team, which will be announced in June.

Rappold, who was a member of the 2003 Men’s At-Large Academic All-District III second-team last season, holds the second-fastest time in Clemson history in the 100 back (49.38) and the fourth-fastest time in Tiger record books in the 100 fly (48.58). He is a member of the 200 medley relay team that recorded the fastest time in Clemson history (1:29.19) in the event during the 2003-04 season. Rappold took fourth place in the 100 back and finished sixth in the 100 fly at the 2004 ACC Championships. He was a member of the Tiger squad that posted a record 13 dual victories for the 2003-04 season, which is the most wins ever recorded by a Clemson men’s swimming and diving team, dating back to the program’s inception in 1953.