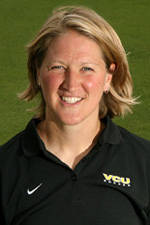 CLEMSON, SC – Clemson women’s soccer head coach Eddie Radwanski announced the hiring of Siri Mullinix as an assistant coach on Friday. Mullinix was an All-American goalkeeper at North Carolina, as well as an Olympic silver medalist and a FIFA Women’s World Cup bronze medalist as a goalkeeper for the U.S. National Team in 2000 and 2003, respectively.

“I am very excited to have Siri join our coaching staff at Clemson. She was a world class player for the U.S. National Team and Washington Freedom,” said Head Coach Eddie Radwanski. “She knows what it takes to compete in the ACC and brings with her a wealth of experience. We are fortunate to have someone of Siri’s coaching caliber and background. She is a great addition for Clemson.”

Mullinix comes to Clemson from Virginia Commonwealth University, where she spent the past three seasons as an assistant coach. Prior to working with the Ram program, Mullinix was an assistant coach under Radwanski at UNC Greensboro from 2005-2008. Her responsibilities at VCU and UNC Greensboro included recruiting, managing of administrative and travel activities and organizing and managing summer camps. She also created and executed all goalkeeper training sessions and assisted with the planning and conducting of team practices and conditioning.

Mullinix played for the U.S. National Team from 1999 to 2004. She started and played every minute in goal for the United States’ team that won the Olympic silver medal in 2000. That year, she started 28 of 29 games, the most games started by a U.S. goalkeeper in a calendar year, and posted a U.S. record 15 shutouts. Mullinix also played for the U.S. National Team that won the bronze medal at the 2003 FIFA Women’s World Cup. In addition, she was a member of the Residency Squad for the 2004 Women’s Olympic Team and the 1999 FIFA Women’s World Cup Team.

From 2001-03, Mullinix played for the Washington Freedom of the Women’s United Soccer Association (WUSA). She helped lead the Freedom to the 2003 WUSA Founder’s Cup Championship and was named to the league’s All-Star team that season.

Mullinix was a three-year starter in goal for the University of North Carolina, during which time the Tar Heels won two NCAA Championships (1996 and 1997) and four ACC titles (1995-98). She was named a First Team All-American and finished her career with a 0.27 goals against average, a mark that remains second-best in Tar Heel program history.

Mullinix graduated from North Carolina in 1999 with a bachelor of arts degree in exercise sport science. In 2010, she earned a masters of education degree in sport leadership at Virginia Commonwealth. Her sister, Cindy, played for the Clemson women’s soccer team from 1999-2002, during which time the Tigers advanced to the NCAA Tournament four times, reaching the quarterfinals in 1999 and 2000.

“I am extremely excited and grateful for the opportunity to join the Clemson family and to be able to coach alongside Eddie Radwanski once again,” said Mullinix. “I look forward to impacting the growth and development of the women’s soccer program as we build the program back into an NCAA Championship caliber team.”