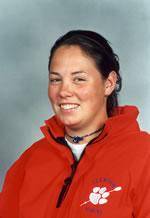 Margaret Gattis steps in for the latest addition of Q&A with Tiger Rowing. The freshman political science major from Ann Arbor, MI raced with the Novice 8+ this season. Read what she had to say about the program below.

What was the best part of your N8+ race at Regionals? Definitely the final 1000m of our three races, especially of our semi and grand final. We were in last place for the first half of both races, which is a pretty tough position to be in since it’s easier to hold boats off than to walk through them. But when we took a move at the halfway point, we just kind of turned it on and decided to go. It was such an awesome feeling being there, all of a sudden walking down boats that thought they’d had us beat. Especially Virginia because that had been a goal of ours for a long time, we’d been dreaming it since ACC’s.

What contributed to the success of the team this year? I think the team as a whole just had this mindset of breaking barriers. We talked a lot about how it’s easier to go someplace you’ve been before, but for a relatively new program like Clemson’s it’s harder to break records and become one of the top teams. Since the fall, every boat has been racing better and faster, staying up there with the bigger and faster teams. I think at a lot of the regattas like San Diego, some pretty fast teams were taking notice of us and the fight we put up. Every year we get faster, everyday even; we deserve the success and I think we all know that… it’s why we do it.

What are you looking forward to this summer? Working out without having to go to school. Not that I don’t love school, just that it adds that much more stress to your life and I’m happy to lay low for a while. Summer workouts are really important to the success of your team in the fall, and I think a lot of us freshmen didn’t really understand that last summer, so working out with fall racing in mind will be pretty key. Also being with family and just taking a break really, it should be fun.

Why did you choose Clemson? People ask me that all the time, being from Michigan and all, but really there’s no definite answer. I’d heard a lot about it from an upperclassmen on the team who I rowed with in high school so I started thinking about it when looking at colleges. So when I went down for a visit, I just fell in love with it, flat out. I was astounded at the amount of school spirit, especially with everyone’s love of athletics, which was something I was looking for. It’s also gorgeous, if you didn’t know, and I still haven’t heard anyone who doesn’t go to USC say a word of bad about it.

Why did you choose to row at Clemson? I wanted to row in college because I had rowed in high school and it’s one of those bugs that you get where you can’t imagine not doing it. So I looked at a bunch of different programs and Clemson’s is in all honesty one of a kind. The coaching staff and the athletic department and the school, I can’t imagine a better place to be an athlete… you are backed everyday by the whole community it seems. When our rowing recruits come they ask us “is it really like this all the time?” and it really is. And you can ask Barbi about how blessed we are. It doesn’t get much better than this.

Why do you push yourself so hard everyday and put in so many hours? Because we know what it’s like to lose by a fraction of a second. Rowing is so unique in that we prepare year round for a 7 minute race. Everything you do all winter shows at in the spring, and knowing that every other rower across the country is working to beat you is a major motivator. We also push each other in every way, to be better and to raise the bar. You can’t do anything out there alone.

How much of your success comes from mental toughness and how much comes from physical preparedness? This year we focused a lot on our mental game. The sport of rowing is faster than it has ever been, so people are looking to find speed in different places and mental toughness is one of those areas. We did a lot of excersises to show us how powerful our minds are and I think it helped a lot of people be ready for racing and break their own records on the erg. Hard work will get you there, but it takes a tough mind to keep going through some of that pain that tries to stop you.

What were your feelings after the races at Regionals? I think over all we did pretty well, I know in out boat it felt like the perfect closing to our first year, but I know a couple other boats were disappointed in the standings. There are always races where you don’t go out there and do what you know you should have or could have done. In the freshman boat, we had that race at the Grand Finals in San Diego. And that’s hard on you mentally because you run it over in your head, but I think we will as a team turn it around and use it as motivation to be faster next year. We went to the awards ceremony at the end of regionals and watched teams like Virginia and Ohio State winning their regions, and I know that will stand out in my head as where I want to be in two years… we walked away from it with something more to fight for.

Tell me what you love about this sport: There is nothing in the world like it. The camaraderie is one of a kind in that no one but these people who you spend day in and day out with will ever understand what you do or why you do it. I know it sounds cheesy, but it’s true. There are always times when it’s rough and you question your motives, but every once and while there will be a piece when every muscle in these eight people is moving together, and the oars are clicking away, and the water is rushing past the shell, and the bow lifts out of the water, and you just fly. We all live for these moments that some people will never understand, that’s why we work so hard. I love rowing because it’s so different and because people think we’re crazy. We probably are, but if rowing was easy and easy to understand, it wouldn’t be what rowing has been for so long… we wouldn’t love it as much.

What has been the greatest experience so far for you as a Clemson rower? I think being Southern Champs at Regionals and beating Virginia. It was the culmination of a whole year of goals and pain and sweat… especially in the freshman class we broke a lot of barriers and stepped it up a lot, even more so in the last few weeks. It’s a really strange feeling to final achieve something that you’ve been thinking and talking about for so long. I couldn’t have been more proud of our boat or our team than at that moment. We as a team made history every day this year, it’s amazing to be apart of it all. We’ve come a long way this year and I can only imagine what will happen next year with our huge senior class and the influx of incoming recruited freshman. Clemson rowing will truly be on a whole new level and I can’t wait to be apart of it all.