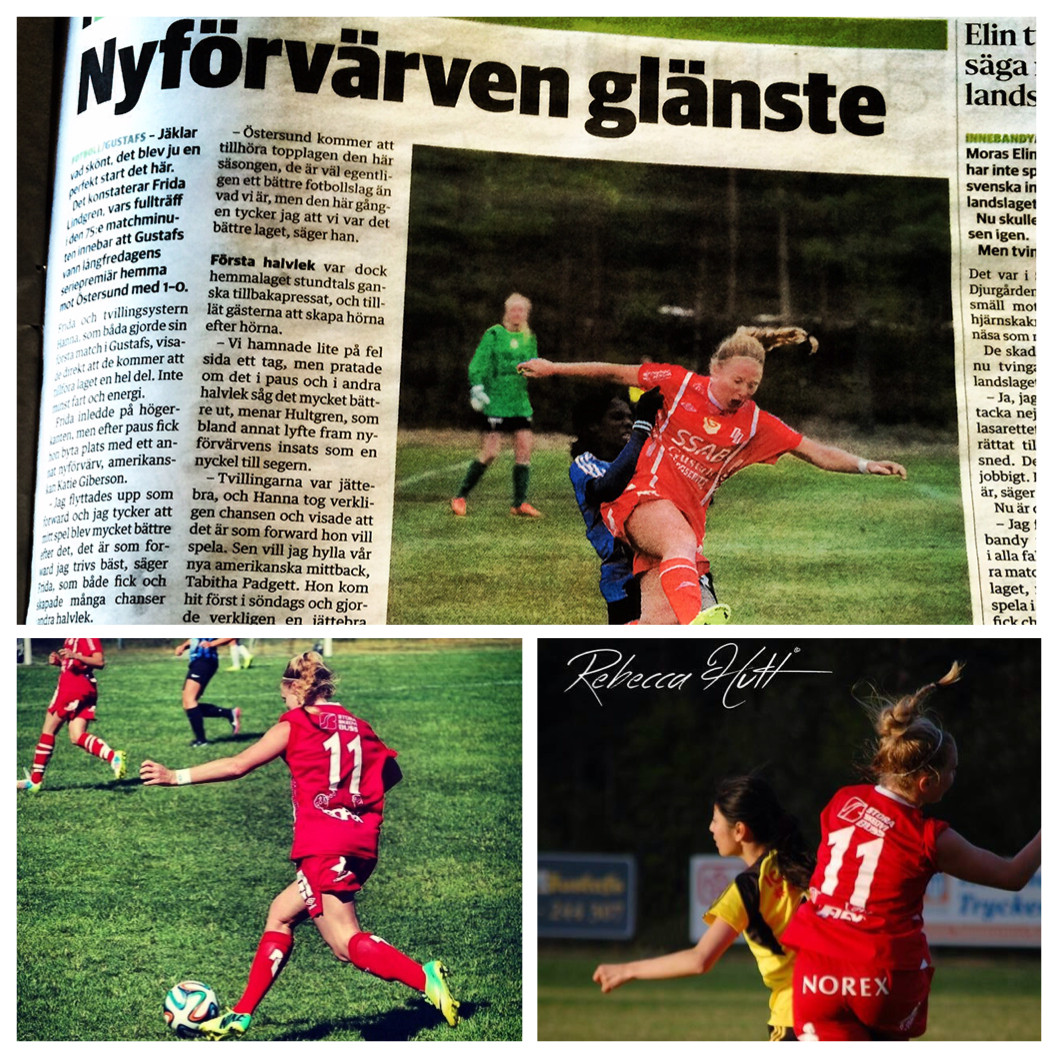 Former Tiger Tabitha Padgett, who lettered at Clemson in 2012 and 2013 after transferring from UNC Greensboro where she also played two seasons, signed a professional contract in the spring of 2014 to play with Gustafs GoIF in Sweden. The native of Orange Park, Fla., who graduated from Clemson in December 2013 with a degree in English, had a very successful rookie season with Gustafs GoIF. She ranked second on the team with 12 goals and led the team in assists with 16. Her team finished fourth in its league (DIV 1 Nora Svealand) with an 11-7-4 record. ClemsonTigers.com caught up with Padgett after she returned to the United States from her first season in Sweden.

Q. How did the opportunity come about for you to play professionally in Sweden after you finished your collegiate career at Clemson?

A. After I finished playing at Clemson, an agent at Connect World Football showed interested in working with me. He found me several different offers and became someone I knew I could trust to help me find a way to play professionally at the level and for the club that would be a good fit for me. I signed with him to be my manager and from there, many teams showed interest, including teams in the United States, Iceland, Norway, Canada, Czech Republic and Australia. It was a professional team in the First Division in Sweden that ended up catching my eye the most. They offered me a deal, we went back and forth and they came back with a counter offer that I couldn’t resist, so I ended up signing with Gustafs GoIF!

Q. What is life in Sweden like? How have you adjusted to living on your own in a foreign country?

A. Life in Sweden has been nothing short of wonderful. Everyone is so welcoming, generous, caring and nice, and they treated me like I was part of the family from the beginning. Living on my own in a foreign country was somewhat of an adjustment, but I was so focused and dedicated to soccer that sometimes I even forgot I was in a foreign country.

Q. Have language barriers been an issue?

A. English is the second language for a lot of people in Sweden. Although they may be shy to speak it at first, they love Americans and American culture. Also, being submersed in their culture was something I enjoyed. It allowed me to pick up the Swedish language just by listening to everyone else speak to each other. The coaches spoke very little English. Sometimes the coaches would pull me aside and say ‘great game’ or tell me how much they appreciated me and what I did for the team, but those were the only English words we really spoke. The girls on the team would just translate when they spoke about drills or games and such.

Q. How have you adjusted to playing with a whole new group of girls?

A. The girls on my team were amazing. We were like one big happy family. There were no problems and we were all focused on soccer and making our team successful. The chemistry between all of us off the field was great, and you could tell that on the field because we were so close and we all battled every game for each other. Their playing style is a lot like we had at Clemson, so it wasn’t too much of a difference for me playing-wise.

Q. Are there any other players on your team or in your league that played collegiately in the U.S.?

A. My best friend, who I played with at UNC Greensboro before transferring to Clemson, Catherine Barnekow, actually had the opportunity to come over and play with us because of an injury to another player. I told my manager at the club that I had someone who I knew was a very skillful player and would be a great addition to the team. Less than two weeks later, she was on a plane flying over for the second half of our season. It was so awesome to not only be able to play professional soccer, but also to play in the midfield alongside my talented best friend.

A. We traveled all over Sweden and a little bit into Norway. We were one spot away from making the playoff game, and then we would have traveled to different countries depending on our draw.

Q. You have obviously been a leader with your production on the field. What role do you play on your team, both on and off the field?

A. I would say that my role on the field is stability. Some girls are younger and some are older, but the trust we shared on and off the field allowed the girls to always be able to depend on me. They knew I was going to fight for the entire 90 minutes and never back down, and I think it gave them encouragement to do the same. I was actually appointed captain for a match when our normal captain was out because her son was sick. The coaches had left the captain’s band on my jersey in the locker room before the game, and when I walked in and saw it, it was the most humbling experience of my professional career to know that not only did the girls trust me and believe in me, but the coaches did as well. Also, to say that I was captain for a game in my first professional season was an honor.

Q. What do you do in your free time when you aren’t playing or training?

A. Usually our free time consisted of a lot of working out, so when we weren’t on the pitch or in the weight room or on the turf, we were having game nights or taking walks through the countryside or finding things to do in town. When it was summertime, we were always at the lake or the beach doing some sort of activity. We traveled to Stockholm every now and then. During our midseason break we traveled to several different countries in Europe, just to take advantage of the time we had over there.

Q. In your experience how is playing professional soccer different from playing college soccer?

A. In my opinion, the difference in playing pro and playing college is the speed of the game. If you think the pace is fast in college, just wait, because it’s turned up two times as much in pro. And in college, you have to manage your time to balance school and sports, but there are people to help you along the way. In pro you are on your own; there is no one making you show up for practice or be on time. If you’re not, they won’t say anything and you may not even know they noticed, but when the roster is called for the next game, your name won’t be on it and you won’t be putting your jersey on. Also in pro, you have to realize that it’s your job. No longer are you balancing soccer and academics. It just becomes all soccer 24 hours a day, 7 days a week, so you must love the game.

Q. I know playing professional soccer was a dream of yours. What is it like to see all of your hard work pay off?

A. I am very blessed to say the least. God has given me a lot of things to be proud of, from playing Division I soccer at Clemson in the ACC, to playing for championship-winning semiprofessional teams in Canada and South Carolina during my summers at Clemson, to now my dream-come-true of playing professional soccer at one of the highest levels in the world. At one of my first practices in Sweden, when my coaches were speaking Swedish and one of my teammates was translating, I almost began to cry thinking what a glorious life I have been blessed with that every day I get to wake up and play the game I love. Ever since I was little, every fun thing I missed because of games or practices, every sacrifice I made to be the best athlete I could, led me to this point. And it was all worth it. Every struggle and hardship I endured only allowed me to be more focused and more dedicated. I was not going to let anything or anyone stand between me and my dream. Also, when my mom came over to visit and I looked up in the crowd as my name was being announced, all I could think was ‘thank you Mom for helping me make my dream come true.’ That was probably my proudest moment, when I looked up in the stands and saw my mom wearing my jersey. It was then that I realized not only had I made my own dream come true, I actually made her dream come true as well.

Q. Now that the season is over, what are you doing? Are you back in the states?

A. During the offseason, they send the Americans home because they don’t want us to experience the extremely cold weather, so we have an offseason for about three months. The girls that are from Europe stay there, play indoor football and train together for those three months. Our team actually won the championship for the indoor Division 1 in Sweden.

Q. Do you plan to go back to Sweden and/or another professional team?

A. I will be joining Gustafs GoIF again for the 2015 season. They wanted to renew my contract after last season before I even left for the break, but after taking time and getting offers from other places, I decided that Gustafs is where I want to be for the upcoming season. With the talent we have now, we are projected to win the league this year and I couldn’t miss being a part of that. Plus, the girls and coaches are like family to me so my heart is in Gustafs.