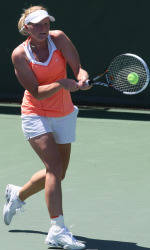 Clemson seniors Josipa Bek and Keri Wong have earned the nation’s No. 1 doubles ranking by the Intercollegiate Tennis Association (ITA) going into the 2011 fall season. Four Tigers total make an appearance in the top 100 singles players, and one player is listed as one of the top ten newcomers nationally.

Bek and Wong were the runners-up in three national tournaments last year, including the NCAA Doubles Championships. The duo each finished with school records in doubles wins, as Bek had 40 on the year, and Wong finished with 39. The two claimed the nation’s no. 1 ranking for a four week period during the 2011 dual match season, and will start form the top this year after ending the season ranked third.

Bek leads the Tigers in singles rankings as well, coming in at No. 8 nationally, just four spots behind her career-best mark of fourth as a freshman. Wong is up to a career-best No. 32, while Nelly Ciolkowski(83rd) and Klara Vyskocilova (98th) each make an appearance in the top 100. Sophomore Monika Kochanova is also listed as the 10th-best newcomer nationally.

Clemson reached the Sweet 16 for the fifth straight season in 2011, making it seven in the past eight seasons for Nancy Harris’ club. The Tigers return four starters from that group, and gain Kochnova and freshman Beatrice Gumulya.

The Tigers open fall play on Sept. 23 at the Furman Fall Classic.