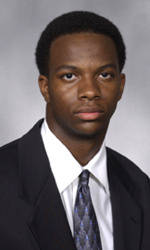 Clemson’s Julius Powell and Duke’s Greg Paulus were named ACC Co-Rookies of the Week in leading their respective teams to a pair of victories last week.

Powell scored a career-high 16 points in just 19 minutes of action as Clemson posted a 96-88 win over Penn State in the ACC/Big Ten Challenge. The freshman forward was 6-of-10 from the field while nailing his first four three-point baskets of the season against the Nittany Lions. Powell would then add five points for the Tigers as Clemson rolled to an 82-63 win over intra-state rival South Carolina. The native of Newton, N.C. combined to grab seven rebounds including four offensive boards in the two games.

Wake Forest’s Justin Gray was selected as the ACC Player of the Week after leading the Demon Deacons to a pair of victories including a win over Wisconsin in the ACC/Big Ten Challenge last week.

The senior guard started the week scoring a career-high 37 points in Wake Forest’s 91-88 win over Wisconsin. Gray went 11-for-20 from the field while going a perfect 13-for-13 from the charity stripe. His 37-point effort against the Badgers tied a Lawrence Joel Coliseum record as well as an ACC/Big Ten Challenge record for points in a game.

Against the Phoenix, the Charlotte, N.C., native shot 67 percent from the floor on 8-of-12 shooting including 4-of-7 from long range in the 19-point win over Elon. For the week, Gray registered 59 points connecting on 19-of-32 field goal attempts. He went a perfect 15-of-15 from the free throw line in the two games and is shooting 83 percent on the season. Gray and the Demon Deacons are back in action on Tuesday, December 13 as they host DePaul in a game shown nationally on ESPN at 9:00 pm.