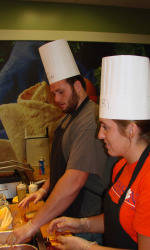 On Thursday, October 22, 2009, the Clemson University Student-Athlete Advisory Committee (SAAC) along with Schilletter Dining Hall hosted Schilletter Night 2009 “Breakfast of Champions.” The event was held during the dinner hours of 5:30-7:30 PM at Schilletter Dining Hall on campus. During this time, over fifty student-athletes from the men’s football and women’s rowing teams volunteered, giving up part of their evening to serve food to Clemson students.

This gave student-athletes a practical way to give back to students for all of their support throughout the school year by serving dinner for an evening. Throughout the evening, students also had the chance to win a Clemson football autographed by Head Coach Dabo Swinney!

This year’s theme was “Breakfast of Champions” as the Tigers had the privilege of serving a full breakfast menu–one that embodied a true champion’s diet! Entrées included a hash brown bar, an oatmeal and grits bar, breakfast casserole, breakfast pizza, biscuits and gravy, eggs and bacon and pancakes. The student-athletes who participated had a blast serving alongside Schilletter employees.

By far the favorite serving station was the dessert table, where athletes got to show off their creative side while decorating tasty treats. Students also enjoyed the opportunity to interact with their favorite Tiger athletes! And the really lucky ones got hot, steaming oatmeal served by Michael Palmer and Dawson Zimmerman.