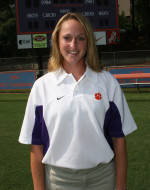 CLEMSON, SC – Laurie Pells, one of the nation’s top goalkeeping coaches, has been named an assistant coach for women’s soccer at the University of Maryland, head coach Brian Pensky announced today.

Pells goes to Maryland after spending the previous six years as an assistant coach at Clemson. During that time, the Lady Tigers reached the NCAA Tournament each year, including the 2006 Elite Eight and the 2001 Sweet 16 of the NCAA Tournament and a number 11 final ranking.

Clemson’s defense has been outstanding since Pells began coaching the goalkeepers. Over the last six years, Clemson has registered 53 team shutouts and allowed just over one goal per match.

During her time at GCC, she set the NSCAA national record with 57 career shutouts as a goalkeeper and was named conference player of the year as a senior. Pells was also named the New Jersey Women of the Year after her sophomore season.

Pells graduated with a master’s degree from the College of New Jersey in the spring of 2001 from the School of Counseling.

“On one hand, this is very difficult as Coach Pells is very talented and popular with the players” said Clemson Head Coach Todd Bramble. “On the other hand, we know this is a great opportunity for her, and that brings us comfort.”

“Laurie Pells embodies everything a coach could ask for in a staff member. I certainly appreciate the passionate contributions she made to our program on many levels.”

Pells played two years in the W-League with the Delaware Genies. Pells was drafted by the Philadelphia Charge in the Women’s United Soccer Association (WUSA) Professional League and played one season in the summer of 2001.

Pells is a director for former US National Team coach Tony DiCicco with SoccerPlus Goalkeeper School. She is a member of the ODP Region I coaching staff.

Pells served on the coaching staff with the U14 Girls U.S. National Team in the summer of 2006.

Pells has her USSF B Coaching License and NSCAA Advance National Goalkeeper License.

“Clemson University has been a first class place to work,” said Pells. I will treasure my six years there being an assistant coach. The experience I had working with Todd Bramble and the Clemson Athletic Department will be a tremendous asset as I move forward as a soccer coach.”