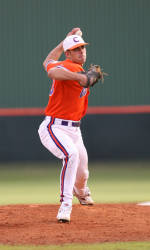 Sophomore Ben Paulsen plated the Tigers’ fifth run of the game by blasting his seventh home run of the season to lead Clemson to a 5-4 victory over Elon on Tuesday in front of 4,325 fans at Doug Kingsmore Stadium.

En route to his third win of the season, Matt Zoltak (3-0) pitched 2.0 innings, allowing two runs on two hits while striking out two and walking none. Casey Harman allowed one run on three hits with five strikeouts in 3.0 innings pitched in relief to keep the Tigers ahead. Matt Vaughn picked up his seventh save of the season, as he pitched a hitless final inning.

The Phoenix got on the scoreboard first with a run in the top of the third inning, as Harry Austin drew a leadoff walk and stole second before Donny Jobe drove him in with a single to center.

The Tigers evened the score in the bottom half of the inning. Mike Freeman led off with a single to left-center, moved to second on a passed ball, and scored on Stan Widmann’s single through the left side.

The Orange and Purple took a 4-1 lead in the fourth inning, thanks in part to a critical Elon miscue. Paulsen led off the frame with a double down the right-field line and Kyle Parker drew a walk. Jeff Schaus moved both runners into scoring position with a sacrifice bunt. With one out, Freeman drove in Paulsen with a bunt single to first. With two outs, Parker and Freeman scored after left-fielder Pat Irvine dropped Alex Lee’s flyball that was hit down the left-field line.

Elon scored two runs in the fifth inning to narrow Clemson’s lead to one run. Dallas Tarleton led off with a single before stealing second and scoring on Austin’s triple to right-center. Chris Dove then plated Austin with a sacrifice fly to center.

In the bottom of the fifth inning, Paulsen blasted a two-out, solo homer well over the right-field fence to put the Tigers ahead 5-3.

Ryan Adams greeted Harman with a homer over the right-field fence to lead off the sixth inning. It was his third long ball of the year. But Harman settled down and retied nine of the next 10 Elon batters.

In the top of the ninth inning, Neal Pritchard led off with a walk. Matt Hill, who came in to pinch run, moved to second on a sacrifice bunt by Chase Austin and advanced to third on Mike Melillo’s flyout. With two outs, Harry Austin grounded out to Widmann at shortstop to end the game.

Freeman went 3-for-4 with two runs and one RBI, while Paulsen added two hits, including a double and homer, and one RBI as well.

Clemson and Elon will conclude their two-game, midweek series on Wednesday at Doug Kingsmore Stadium at 7:15 PM.