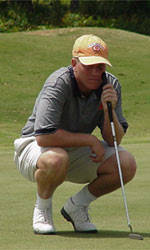 Eight players representing the United States will compete against their counterparts from Great Britain and Ireland (GB&I) in the Ryder Cup-style event June 27-28.

Festivities officially began this morning as tournament director Tim Brown declared the games open at the opening ceremony. The ceremony included the raising of the flags of the participating countries, national anthems and speeches from coaches and players.

Competition will begin tomorrow at 8 a.m. as players team-up in fourball matches. Tomorrow afternoon’s matches are scheduled to begin at approximately 1:30 p.m., and will follow a foursomes format.

Thursday morning and afternoon will be singles matches beginning at 7 a.m. and 12:30 p.m.

Live scoring of the event can be found online at www.bluegolf.com and collegiategolf.com.