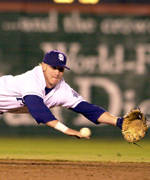 As a teenager, Khalil Greene made choices that allowed him to extract more from his superb motor skills.

Greene forged a healthier diet and stuck to it. He has eaten oatmeal for breakfast nearly every morning for five years. He has eaten enough tuna to stock a supermarket.

The Padres, who employ the 24-year-old as their shortstop and No. 8 hitter, also have others to thank for Greene’s contributions over this season’s first 26 games, during which Greene has played stellar defense and batted .286 with a .362 on-base percentage.

To read the rest of this article, click here.