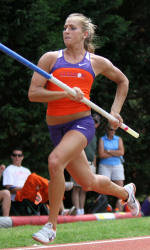 CLEMSON, SC – The Clemson track & field program has closed the book on a successful indoor season and turned its attention to the outdoor campaign, which begins Friday and concludes Saturday at Irwin Belk Track on the campus of UNC Charlotte. The 49er Classic will feature multiple athletes across several events from Clemson, beginning with the women’s hammer throw at noon Friday.

Warren Fraser and Justin Murdock return to the track this weekend after several weeks away from competition. Both will run in the 400-meter dash, with the preliminary rounds scheduled for Friday at 4:15 PM. Should either or both advance to Saturday’s final, it will be held at 12:50.

Also on the track on Friday will be 10 student-athletes in the men’s and women’s 1500-meter run. Natalie Anthony and Kim Ruck lead a group of six in the women’s 1500, while Aaron Ramirez has the best seed time among four entries in the men’s race. Those two events are tentatively scheduled for 6:55 and 7:30.

More field event action is in store for Saturday, starting with the men’s shot put at 10:00 AM. T.J. Christy and Cory Thalheimer will not only compete in that event, but also the discus as well at 1:00 PM. A pair of All-ACC freshmen, Torian Ware in the high jump and Shai Carpenter in the triple jump, are slated to compete at 12:00 and 1:45, respectively.

Brianna Blanton, Clemson’s best 800-meter runner on the women’s side, leads a large group of entries for the Tigers in that event at 1:15 Saturday. Following that will be the men’s 800, featuring eight Clemson runners, including all-conference standout Chris Slate.

Live results will be available via FlashResults.com for the meet.