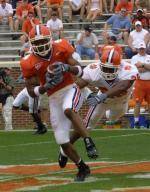 Traffic Advice Due to construction, Perimeter road will be closed near the entrance to Lot 5 (lot behind West Endzone) on Saturday. All normal parking lots will be open, but fans attending Saturday’s Spring Game should take the Perimeter Road blockage at Lot 5 into account when they make there travel plans.

There is no reserved parking on Saturday. All lots will befilled on a first-come, first-serve basis. Fans who wish to attendthe women’s tennis match, the track meet, the football game and thebaseball game should travel to campus via Highway 93 and park nearKingsmore Stadium since the baseball game is the last event of theday. Fans coming to the football game from Seneca should park onthe North side of the stadium.

Tiger Walk The Clemson team will walk from the Jervey Athletic Center to Death Valley beginning at noon. Clemson fans are encouraged to form a path down the Avenue of Champions to Williamson Road. The team will turn right and enter the stadium from the top of the hill.

The team will also walk back to the stadium using the same path after the game.