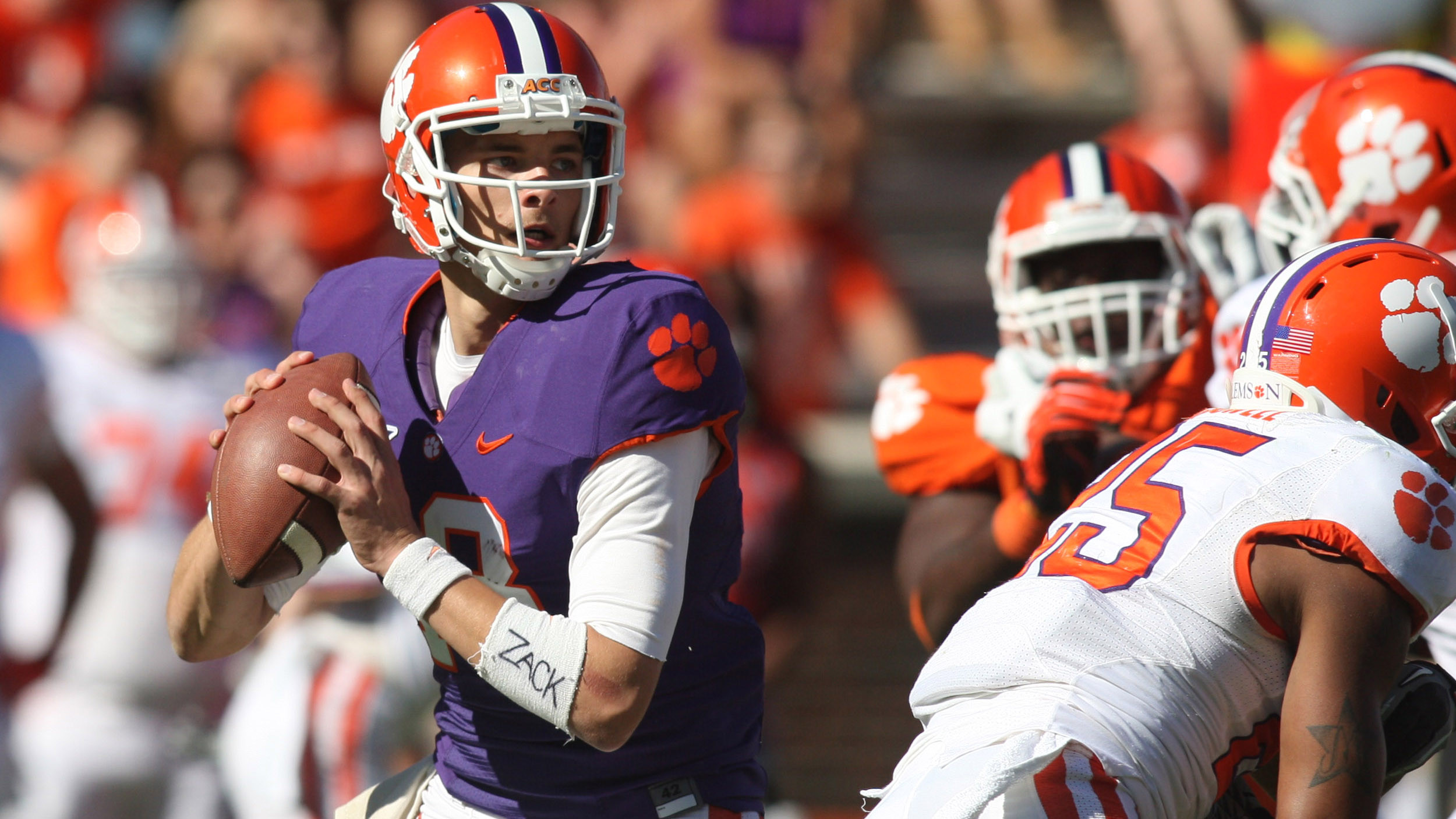 CLEMSON, SC – Cole Stoudt set a Clemson spring game record with 304 yards passing and threw four touchdown passes, but his White team lost to the Orange team 34-26 at the annual Clemson Spring Football game on Saturday. The contest was the 15th and final practice for Dabo Swinney‘s Clemson Football team.

A spring game record crowd of 30,000 attended the game at Memorial Stadium, the last time Clemson fans will see the Tigers play in that legendary facility until Dabo Swinney‘s team opens the 2013 season with an epic clash against a top 10 Georgia team. It will be the first time the two schools have met on the gridiron since 2003.

The Spring game was marred by some injuries in the first half. Freshman quarterback Chad Kelly, who was competing with Stoudt for the backup spot behind Tajh Boyd, suffered a knee injury that could be serious. Swinney indicated to the media after the game that it was probably a torn ACL. Tight end Sam Cooper and tackle Kalon Davis also suffered knee injuries, but they are not believed to be as serious. All three injuries took place in the first 20 plays of the game.

Boyd, a returning first-team All-American who has set school records for passing yardage in a season and touchdown passes in a career, did not play as Swinney wanted to see his younger quarterbacks in stadium game action.

Kelly got his Orange team off to a great start by driving his team 70 yards in 10 plays for a score. The nephew of former Buffalo Bills quarterback Jim Kelly completed 6-7 passes for 43 yards on that opening drive and also had two rushes for 14 yards. He completed the drive with a 16-yard scoring pass to Charone Peake.

Kelly was driving his team for another score when he was injured at the end of a 17-yard run. Bradley Pinion had a 43-yard field goal at the end of the drive. Martavis Bryant, who had seven catches for 110 yards for the Orange team, caught a 34-yard touchdown pass from Donny McElveen with 6:16 left in the first period to give the Orange team a commanding 17-0 lead.

But, the White team came back with 26 points thanks to the four touchdown passes by Stoudt, who has been Boyd’s backup the last two years. He hit touchdown passes of 41 and 50 yards to All-America receiver Sammy Watkins to put his team within 17-14. After Nick Schuessler scored on a 35-yard run for the Orange, Stoudt threw two more touchdown passes, a 75-yarder to Stanton Seckinger, and a 51-yarder to Adam Humphries.

Stoudt was 16-24 for 304 in the first half when his team led 26-24. But, he did not play in the second half as Swinney and offensive coordinator Chad Morris decided to give more playing time to other players.

The Orange team outscored the White team 10-0 in the second half, scoring on a 50-yard touchdown pass from McElveen to freshman Jordan Leggett, and a 41-yard field goal by Pinion.

Watkins led all receivers in yardage with seven catches for 156 yards and the two scores.

Leggett, a tight end who entered Clemson in January, finished with seven catches for 97 yards and a score for the Orange. Schuessler played quarterback for both teams and combined to throw for 220 yards on 21-34 passing.

There were also some defensive standouts as well. Grady Jarrett had three sacks in the contest. He was co-MVP of the Clemson team last year on defense. Tavaris Barnes added a pair of sacks as well. Safety Robert Smith was the top tackler for the victorious Orange. Kellen Jones and Darius Robinson both had intercetions.

The top tackler in the game was linebacker B.J. Goodson with 13 stops for the White team. DeShawn Williams had two sacks, three tackles for loss and seven total tackles. Travis Blanks had an interception and six tackles from his safety positin. Vic Beasley had two sacks, giving him 10 sacks in four scrimmages or half scrimmages this spring.