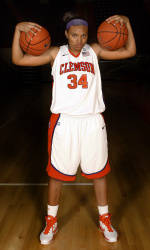 CLEMSON, SC – When Kelly Gramlich met Itoro Coleman for the first time during her recruitment to Clemson, the Lady Tigers’ head coach told her something that all shooters like to hear.

Why not? Gramlich was one of the best shooters in the state of Texas coming out of high school this past winter where she led L.C. Anderson High School in scoring and three-point shooting. She was the Class 5A Texas State three-point champion and averaged 22.9 points per game.

Gramlich is one of four new players that enrolled at Clemson earlier this month. She is joined by fellow guard Chelsea Lindsay, center Deja Hawkins and forward Natiece Ford (a fifth, three-star guard Nikki Dixon, will enroll in August). The 2011 class is listed as the 30th best class in the country by ESPN’s Hoopgurlz.

“It is nice to know we are thought of like that,” said Ford, who is ranked as the sixth best post player in the country. “I’m sure there will be a lot of pressure put on us, but then again, it’s a great thing. As a player you welcome challenges like that.”

Though it has been just a little bit longer than a week since enrolling in school, Hawkins says she can see herself and the other new girls already fitting in with the rest of the team. She feels they can be a nice addition to what Coleman already has in place, though she understands they will have to work extremely hard to get to the level their head coach expects them to play at.

They hope the hard work lands the Lady Tigers back in the NCAA Tournament, a place the Clemson program has not been since the 2001-’02 season. That was the end of a run that included 15 straight postseason appearances, including 14 trips to the NCAA Tournament.

“I sure definitely hope so,” Gramlich said, “and I think we can. That is what we were brought in here to help do, and I really hope we can accomplish that.”

Hawkins, who helped lead her Riverside Baptist (Upper Marlboro, MD) team to a 30-5 record last year, says she is excited about working for Coleman and her coaching staff.

“It’s going to be exciting because she has been here before and she has won championships here,” the forward said. “She has a master plan laid out for us so all we have to do is follow her lead.”

So far Coleman’s master plan landed the 30th-ranked class out of 333 Division I women’s basketball programs. The Clemson class ranks fifth in the ACC behind Duke (4), North Carolina (16), Georgia Tech (20) and NC State (28).

“I’m very excited that I’m part of this class,” Lindsay said. “I think this class can change things around, and bring Clemson back.”