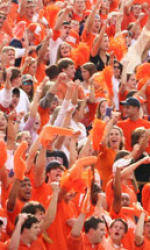 Clemson averaged 78,232 fans for its six home games during the 2005 football season, the ninth highest single season average in Clemson history. Five of the six home games drew more than 77,000 fans, including a high of 80,536 for the Florida State game in the final home game of the season.

Clemson’s capacity varied over the course of the season due to the construction of the West Zone at Clemson Memorial Stadium. The construction continues during this off-season.

The average of 78,232 for the season ranks ninth best in Clemson history. Five of the top nine season averages have taken place under current Head Coach Tommy Bowden.