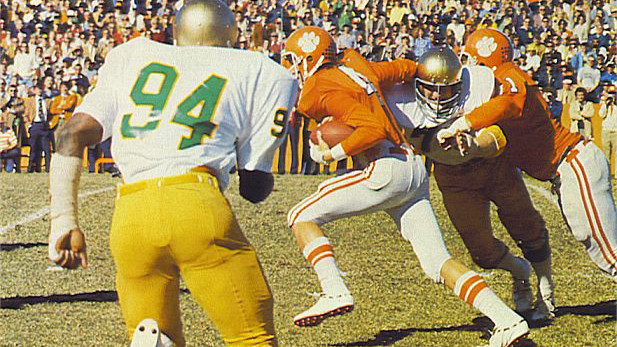 Notre Dame Comes to Clemson in 2015

CLEMSON, SC – Notre Dame will play at Clemson  for the first time since 1977 when the Irish come to Memorial Stadium on October 3, 2015.  The ACC and the University of Notre Dame announced the dates of Notre Dame’s games with ACC schools for the 2014-16 seasons on Friday.

The last time the two schools met at Clemson was November 12, 1977, when a pair of top-15 football teams met in Clemson’s Death Valley.  A fifth-ranked Notre Dame football team led by Joe Montana defeated a 15th-ranked Clemson team led by Steve Fuller, 21-17.   Both quarterbacks went on to win Super Bowls in the NFL.

Notre Dame went on to win the 1977 National Championship. Notre Dame won seven of its last eight games that year by at least 24 points, including a 38-10 win over number-one ranked Texas in the Cotton Bowl.  The only close game the Irish had was the four-point decision at Clemson, a game Clemson led 17-7 entering the fourth period.  Thirty-six players in that game went on to play in the NFL.

Clemson came back to win at Notre Dame two years later, 16-10.  It was just the second time in the last 40 years (1940-79) that Notre Dame’s seniors lost their last home game.  Billy Lott scored a touchdown late in the game on a 26-yard run to give Clemson the win and overcome a 10-0 deficit.

Danny Ford led Clemson to that victory as head coach of the Tigers.  Thirty-one years old at the time, Ford is still the second youngest coach and the youngest since 1934, to beat Notre Dame in Notre Dame Stadium.

Other Notes:  Clemson will be one of six ACC teams Notre Dame plays in 2015.  The Irish will also play at Virginia, at Pittsburgh and against Boston College in Fenway Park.  Georgia Tech and  Wake Forest will travel to South Bend…Notre Dame will play Massachusetts in South Bend the week before it comes to Clemson…no release yet on when Clemson will play at Notre Dame, but it won’t be in 2016…Notre Dame’s quarterback for the 2015 game at Clemson could be Myrtle Beach, SC native Everett Golson, who will still be eligible for the 2015 season…it would be his only career game in his home state…based on the future schedule rotation that has been released by the ACC, Clemson will play Florida State and Notre Dame at home in 2015…other home games will included Boston College, Wake Forest and Georgia Tech…Clemson’s road schedule that year will be Louisville, NC State, Syracuse, South Carolina and Miami.