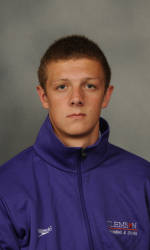 North Carolina Tops Clemson in Swimming and Diving on Saturday

Senior Thomas Recko had a strong day by winning the 200 back and finishing second in the 100 back for the men. Senior Katrina Obas finished the day with a win in the 200 IM and third place finishes in the 100 and 200 breast.

In diving, sophomore Patrick Chamberlain took fourth on both events for the men.

The Tigers will be back in action on Saturday, January 16 as they host nationally ranked Florida State in McHugh Natatorium at 11:00 a.m.