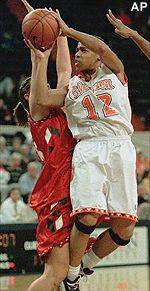 GREENSBORO, NC-Jackie Higgins tipped in a missed shot with 1.2 seconds remaining to give North Carolina a 56-54 win in the ACC Women’s Basketball Quarterfinals at Greensboro, NC Saturday afternoon.

North Carolina was led in scoring by LaQuanda Barksdale with 26 points. She was 11-18 from the field and 4-4 from the free throw line. She also had seven rebounds.

Clemson was led in scoring by Krystal Scott who tied a career high with 18 points. Erin Batth had 15 points and 11 rebounds.

North Carolina improves its record to 17-11 overall, while Clemson falls to 18-11 this season.

In the first half, North Carolina took a 21-16 lead with 5:45 left to go. From this point, Clemson went on an 8-0 rally and took a 24-21 advantage with 4:30 remaining. The Lady Tigers’ Krystal Scott scored five points in this run. Clemson did not score in the last 4:30 of the first half, and North Carolina scored four unanswered points and took a 25-24 lead into the lockerroom.

Clemson took a 50-49 lead with 1:32 remaining as Floyd hit a jump shot from the left. North Carolina took the lead as LaQuanda Barksdale hit from underneath. Clemson took a 52-51 advantage with :53 seconds remaining as Forns hit a jumper inside the paint. Leah Sharp gave North Carolina a two point advantage as she hit a three-point goal from the right with :32 seconds left.

Clemson’s Krystal Scott tied the game as she hit a field goal from the left side with :20 seconds remaining. North Carolina’s Nikki Teasley missed a shot from the left side and Jackie Higgins tipped the ball in with 1.2 seconds left in the game. Clemson was unable to attempt a shot.

“First I would like to congratulate North Carolina for winning a hard, fought game,” said Clemson Head Coach Jim Davis. “I am proud of our players in the way they competed. We did not play our best game offensively. The intensity of the defense had a lot to do with this. We could not make the free throws and that was the difference in the game. We fought so very hard. The rebounding was even today. This basketball team has come a long way. Our 18 wins is a credit to the effort and work our team has put in this year. I don’t think our season is over. I was very proud of the way we executed, especially at the end. We answered and took the lead and executed when the pressure was on. I think Erin Batth played like a warrior. You can’t fault the effort of both teams.”