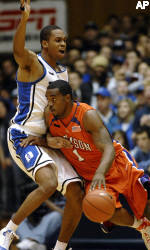 DURHAM, N.C. (AP) – Mike Krzyzewski drew a circle around the basket on his chalkboard at halftime to make his point: Clemson was dominating that part of the floor, but Duke was in control everywhere else.

The No. 7 Blue Devils overcame their decided size disadvantage with quickness, using 24 points from DeMarcus Nelson to beat No. 24 Clemson 93-80 Saturday night for their 22nd straight win in the series.

Kyle Singler added 17 points and helped key the game-breaking run for the Blue Devils (15-1, 3-0 Atlantic Coast Conference). They blew a 12-point first-half lead, regrouped and eventually ran away from the Tigers while improving to 54-4 against them at Cameron Indoor Stadium.

“It took us the whole game to really wear them down,” Nelson said.

Gerald Henderson had 16 points, Nolan Smith scored 13 and Jon Scheyer finished with 12 for Duke, which turned up the defensive pressure and rode some hot shooting to its fifth straight win.

“Our game plan was to try to force them into a lot of turnovers, try to press them and trap them in different areas and try to trap them in the post a little bit,” Nelson said. “They never went away.”

Clemson held a 42-26 rebounding advantage, but the Tigers turned it over 21 times — 5.5 more than their average. Duke turned those miscues into 37 points and shot 53.4 percent, knocking down 10 of 11 shots in one early stretch.

“I didn’t think that we played particularly well here today, but as always, Duke had something to do with it,” Clemson coach Oliver Purnell said. “Our inability to take care of the basketball in both halves kept us from really getting any kind of lead. … Duke lives on turnovers.”

K.C. Rivers scored 16 points and surpassed the 1,000-point mark for his career with a game-tying 3-pointer in the second half for the Tigers (14-4, 2-2), who were denied their first victory in the series since an overtime triumph at home more than a decade ago. They haven’t won at Cameron since 1995.

A year ago, they came close to knocking off Duke. The Blue Devils took advantage of what ACC officials would later admit was a timing error and claimed a memorable 68-66 victory on David McClure’s last-second layup.

This one was decided significantly earlier. After Clemson tied it for the last time when Rivers’ 3-pointer with 11 minutes remaining made it 58-all, Nelson and Singler took over.

About 15 seconds later, Nelson knocked down a 3 from the left corner, putting Duke ahead for good and starting the decisive 23-7 run. Singler later hit 3s about a minute apart, capping the run by converting from the same spot that Nelson did to make it 81-65 with 5:45 left.

“It’s tough for us to score just inside, and we’re better when we’re pushing it,” Krzyzewski said. “We told them, ‘Just keep pushing it.”‘

Demontez Still finished with 15 points and Trevor Booker had 15 points and 10 rebounds for Clemson, which had its two-game winning streak snapped. The Tigers also were plagued by their perennial problems from the free-throw line, hitting just 10 of their 23 foul shots and attempting fewer free throws than Duke made (24).

“The (last) couple-three years, we haven’t shot it well” from the line, Purnell said. “The combination of those two things (turnovers and missed free throws) really kept us from getting any kind of working margin, and eventually got us out of the ballgame.”

Duke came out firing, building an early double-figure lead and hitting 10 of 11 shots, with Scheyer’s 3 from the corner capping that burst and concluding the 15-2 run that made it 26-14 with 11 minutes left in the half. Clemson tightened things up, cutting it to 41-38 on Terrence Oglesby’s 3 with 32 seconds left.

“We knew coming into the game that (Clemson) was a really athletic team,” Nelson said. “They came out in the first half and really made some big-time plays. … We had to make that adjustment to keep those guys off the boards. But we play great defense — we forced them into a lot of turnovers, forced them to take tough shots.”