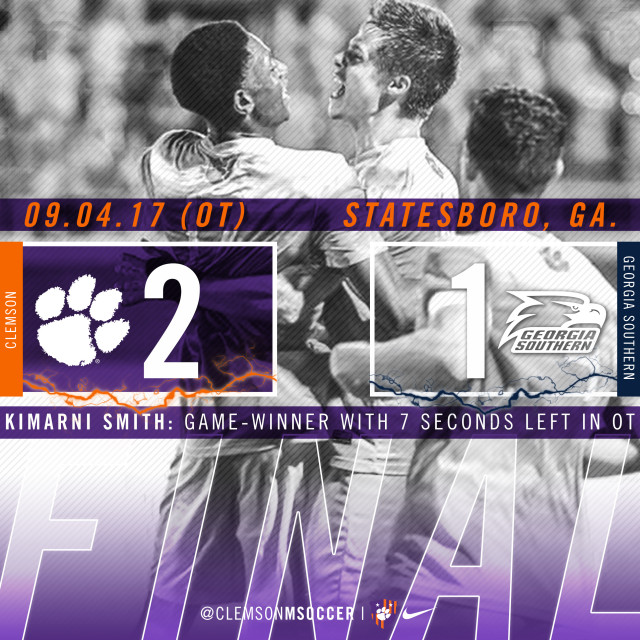 STATESBORO, Ga. – Kimarni Smith’s goal with seven seconds remaining in the first overtime period gave the No. 5 Clemson men’s soccer team a 2-1 win over Georgia Southern on Monday night. With the victory, Clemson moves to 4-0-0 on the season, while Georgia Southern drops to 1-3-0.

Freshman Justin Malou got Clemson on the board in the 27th minute, heading in his first career goal off of a Harrison Kurtz corner kick. The score put the Tigers up 1-0, and they took that lead into halftime. Georgia Southern then tied the score in the 50th minute on Josh Bronstorph’s first goal of the season, a penalty kick earned after Aldair Cortes was brought down in the box.

The two teams went scoreless in the rest of regulation and forced overtime. The Tigers outshot the Eagles 5-1 in the first 10-minute overtime period, and Smith capitalized by redirecting a Diego Campos cross from the left side of the box into the back of the net with seven seconds remaining to give Clemson the win.

“It was good to get the win, but credit Georgia Southern for making it very difficult,” head coach Mike Noonan said. “The game was an emotional dip after a very good performance against South Carolina. I am proud that the players were resilient enough to see it through. However, we need to be much better as we enter ACC play.”

The Tigers stay on the road for their next matchup, as they face NC State in Raleigh, N.C. for both teams’ ACC opener on Friday at 7 p.m.