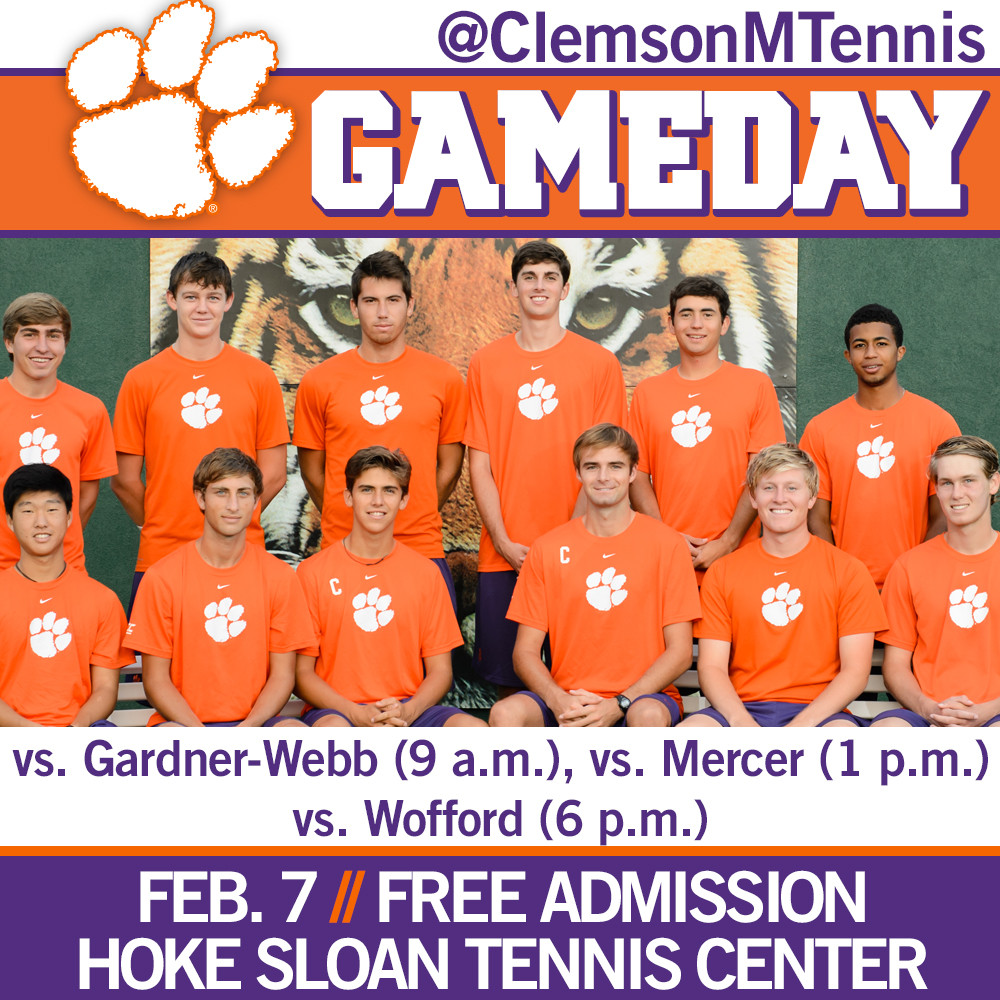 CLEMSON, S.C. – The 34th-ranked Clemson men’s tennis team hosts its first home matches of the season on Saturday, Feb. 7 at the Hoke Sloan Tennis Center. The Tigers kick off the day at 9 a.m. against Gardner-Webb. They play again at 1 p.m. against Mercer and wrap up the day’s competition against Wofford at 6 p.m. Live stats be will available on ClemsonTigers.com and updates will also be available on Twitter @ClemsonMTennis throughout the day. Admission to all three matches is free. Free breakfast will be offered to the first 100 fans at the morning match against Gardner-Webb and free t-shirts will be offered to fans at the 6 p.m. Wofford match.

Clemson stands at 2-3 on the season. The Tigers are coming off a 6-1 loss to No. 23 South Carolina (then No. 29) last Saturday in Columbia. Clemson’s No. 2 doubles team of Hampton Drake and Christian Harris knocked off a ranked opponent last weekend, the 45th-ranked Gamecock doubles team of Thomas Mayronne and Harrison O’Keefe. Clemson senior captain Hunter Harrington won his match at No. 1 singles, defeating South Carolina’s Andrew Adams. Harrington is ranked as the 69th-best singles player in the nation. Harrington and fellow senior co-captain Alejandro Augusto are ranked 60th nationally in doubles.

Scouting Gardner-WebbThe Runnin’ Bulldogs are 3-2 on the young season featuring wins over USC-Upstate, Georgia State and Davidson. The only common opponent between Clemson and Gardner-Webb is Davidson, who the Tigers beat 7-0 earlier this season. The Runnin’ Bulldogs are on a two match winning streak. The No. 1 doubles team of Ernest Alberch and Nikita Zverkov was victorious over the Davidson team of Jack Riazzi and Evan Watkins most recently, by a score of 6-0.

Clemson holds a 4-0 all-time advantage in the series over Gardner-Webb. All matches in the series have been played at Clemson and all have ended with a 7-0 Clemson score. The two teams most recently met on Jan. 19, 2014.

Scouting MercerMercer is 2-6 on the season, with those two wins coming over Southern Illinois and Gardner-Webb. The Bears have already faced three SEC schools (Arkansas, Tennessee and Auburn) and one ACC school (Georgia Tech) in 2015.

Clemson leads the all-time series with Mercer 2-1, the Tigers have won the last two matches in the series. Saturday’s meeting will be the first since April 3, 1994.

Scouting WoffordWofford boasts a 3-1 record this season, the Terriers are on a two match winning streak. Their only loss came to Winthrop on Jan. 30, a 4-3 decision. Most recently, Wofford rallied to knock off former Southern Conference rival Appalachian State 4-3 on Thursday, Feb. 5.

Clemson leads the all-time series with Wofford 24-12. The Tigers have six straight wins in the series, the last three of which have been 7-0. The two teams met most recently on Jan. 31, 2014.