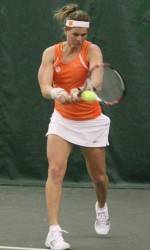 No. 10 Clemson to Take on Columbia on Tuesday

BOCA RATON, FL – The 10th-ranked Clemson women’s tennis team will take on Columbia University in Boca Raton, FL on Tuesday at 6:00 pm in a spring break dual match. The match will take place at the USTA Training Facility. This will be the first-ever meeting between the Tigers (13-3) and Lions (5-6).

Clemson has been off from competition since March 7, a 5-2 win over #13 Florida State. From Feb. 21 until March 7, Clemson played five matches against top-25 opponents, winning four of the matchups. Clemson is off to a 2-1 ACC start, having already played three of the top teams in the league, including two on the road.

Wong was also named the ACC Player of the Week last week after going 2-0 in singles and doubles against #20 South Florida and #13 FSU.

Columbia is unranked, but has won three of its past four matches. Most recently, Columbia suffered a 6-1 loss at the hands of Maryland on March 6.

After the match with Columbia, Clemson will be off until a home match on March 27 against NC State, meaning they will only play one match over an 18-day period.