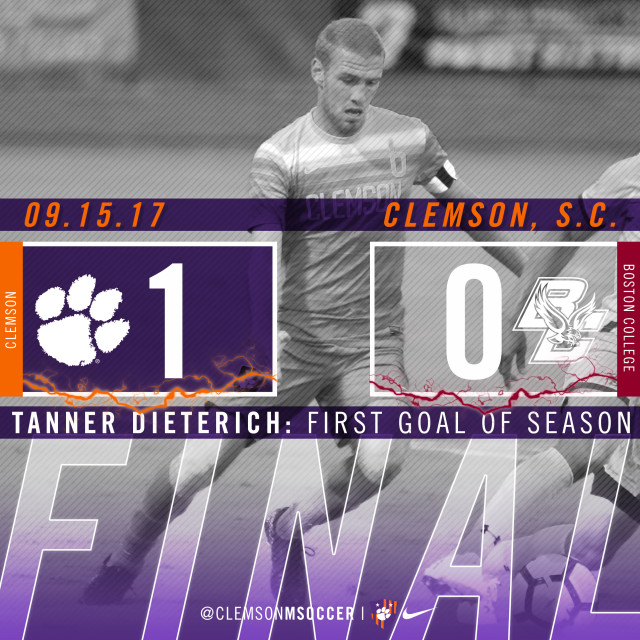 No. 10 Clemson Takes Down Boston College

CLEMSON, S.C. – Tanner Dieterich’s first goal of the season broke a scoreless tie in the 60th minute and was all the No. 10 Clemson Tigers needed to defeat the Boston College Eagles 1-0 at Historic Riggs Field on Friday night. With the win, the Tigers move to 5-1-0 overall with a 1-1-0 record in conference play, while the Eagles fall to 2-4-0 overall and 0-2-0 in the ACC.

The Tigers outshot the Eagles 9-3 in the first half, but the teams went into the break scoreless. The Tigers had a few close calls early in the second half, and then Dieterich dribbled in from the right side of the box and netted a shot from five yards out. He was assisted by seniors Saul Chinchilla and Oliver Shannon, both players’ first assists of the season.

Boston College almost tied it in the 67th minute when a shot by Trevor Davock went just wide of the right side of the goal. The Tiger defense limited the Eagle offense to just that one shot on goal during the entire match.

“I’m really proud of the guys,” head coach Mike Noonan said. “It’s a good bounce-back win, with a clean sheet. But we made it more difficult than it needed to be. But I thought we came out with a better focus than we had last week, and as I told the players after the game, it’s something to build on. We’ve got another big test on Tuesday night, and we hope to get a great crowd out. This is what college soccer is all about…UCLA and Clemson.”

The Tigers continue their four-match homestand when they host UCLA on Tuesday night at 7 p.m. at Historic Riggs Field.