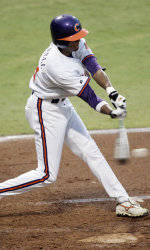 Freshman Addison Johnson doubled to left field to score D.J. Mitchell from second base to propel #16 Clemson to an 11-10 come-from-behind victory over Georgia Wednesday night in front of 5,362 fans at Doug Kingsmore Stadium. The Tigers improved to 20-9, while the Bulldogs dropped to 10-19. Clemson won both games of the midweek, home-and-home series.

Stephen Clyne (4-0), the eighth hurler of the night for the Tigers, retired the only batter he faced to pick up the win. Joshua Fields (1-5) allowed two runs in the ninth inning and suffered the loss for Georgia.

Johnson went 3-for-4 with two RBIs to highlight the Tigers’ 11-hit attack. Mitchell had the game-tying single in the ninth and two RBIs in all. Wilson Boyd had a stellar game with two triples and three RBIs off the bench. Marquez Smith added three hits, an RBI, and two runs scored.

The Tigers scored a run in the first inning for an early 1-0 lead. With one out, Taylor Harbin hit a triple that hit the top of the left-field fence. Smith then drove in Harbin with a single down the left-field line.

The Bulldogs quickly tied it up in the third inning, as Jake Crane led off with a home run to left field, his second of the year. Gordon Beckham and Jonathan Wyatt hit back-to-back singles, and Rich Poythress drew a walk to load the bases with two outs. Harbin saved two runs with a diving stop of a sharp grounder by Matt Robbins in the hole at shortstop, as he threw to second for the force out.

Georgia took the lead with three more runs thanks to two home runs in the top of the fifth. With one out, Beckham singled down the right-field line. Wyatt then hit a two-run homer to right-center, his third of the season. Two batters later, Matt Robbins hit a solo homer, his second of the year, to centerfield to put the Bulldogs on top 4-1.

Clemson responded with a run in the bottom of the fifth. Alex Burg and Mitchell each drew walks, and with one out, Johnson singled to right field to load the bases. Brad Chalk then hit a sacrifice fly to left field, scoring Burg.

The Bulldogs added three runs in the top of the sixth thanks to a three-run homer to right field by Olson that gave Georgia a 7-2 lead. It was his second long ball of the year.

Clemson tacked on three runs in the bottom of the sixth, as Smith led off with single up the middle and Ben Paulsen walked. Doug Hogan then drove in Smith with a single through the right side. Mitchell walked to load the bases, and with two outs, Johnson drew a bases-loaded walk. Chalk followed with a walk to score Hogan, cutting the Bulldog lead to 7-5. Harbin followed with a liner deep to left, but Matt Cerione made the catch near the fence to thwart the Tigers.

In the seventh inning, Ryan Peisel singled through the right side and moved to third on a throwing error by P.J. Zocchi. Cerione was intentionally walked and Crane bunted into a fielder’s choice, as Peisel was retired at home on a good throw from Zocchi. Miles Starr drew a walk to load the bases. Olson then drove home Cerione and Crane with a single through the right side. Beckham followed with a single to left-center, scoring Starr to up the Bulldog lead back to five runs.

In the bottom of the seventh inning, Smith singled through the right side and Paulsen followed with a sharp grounder to shortstop. Beckham booted the potential double-play ball, allowing Smith to advance to third. Hogan walked to load the bases. Boyd laced a three-run triple down the right-field line to score Smith, Paulsen, and Hogan. Boyd then scored on a groundout by Mitchell to move the Tigers within one run.

With one out in the bottom of the ninth, Boyd tripled to right-center. Mitchell drove in the tying run with a single through the right side that scored Boyd. Mitchell then stole second and Johnson drove him home to win the game with a double to left field. Cerione appeared to have made the diving catch, but the ball came loose as he rolled on the ground.

Clemson returns to ACC action Friday when it travels to Blacksburg, VA to face Virginia Tech at 7:00 PM.