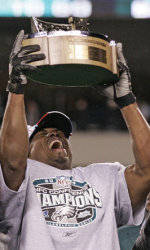 Nineteen Tigers in the NFL

There are currently 19 former Clemson football players on rosters of NFL teams. The list includes four rookies who played on Clemson’s 2004 team and three other players who left Clemson after the 2003 season to become practice squad players in 2004. They are also considered rookies in 2005.

At the other end of the spectrum are Chris Gardocki, Brentson Buckner and Brian Dawkins. Gardocki is in his 15th NFL season, the most ever for a former Clemson player in terms of NFL service. He is currently the starting punter for the Pittsburgh Steelers. Buckner is in his 12th NFL season, his fifth with the Carolina Panthers as a starting defensive tackle. He is tied for the longest service among former Clemson defensive linemen with his 12 seasons. Jeff Bryant also played 12 years in the NFL. Dawkins, a four-time Pro Bowl selection, is in his 10th year with the Philadelphia Eagles. Trevor Pryce (Denver) and Dexter McCleon (Kansas City) are both in their ninth seasons.

Among the rookies in the NFL from Clemson are LeRoy Hill and Justin Miller. Hill is a second team linebacker and special teams player for Seattle. Miller is a second team cornerback who has continued his outstanding kickoff return abilities at the next level. Through three weeks, Miller ranks fourth in the NFL in kickoff return average with a 28.6 figure. He had a 30.7 average at Clemson, the fourth highest average in college football history.