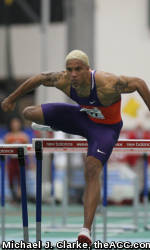 CLEMSON, SC – The list of accepted entries for the 2012 NCAA Indoor Track & Field Championships was released Monday. Clemson will have a total of nine student-athletes – eight females and one male – competing at the national indoor meet in Boise, ID this weekend. The meet is scheduled for Friday and Saturday, March 9-10, at the Idaho Center Arena.

Clemson had five automatic qualifiers for the NCAA national meet, three in the 60 hurdles alone. Defending women’s indoor champion Brianna Rollins auto qualified in the event with the nation’s top time (7.97), while teammate Bridgette Owens had the same time in a close runner-up finish behind Rollins at the New Balance Invitational last month. Spencer Adams was the lone qualifier for the men’s team in the 60-meter hurdles.

Dezerea Bryant was accepted as an at-large entry in two events, the 60 dash and 200 dash. The freshman phenom from Milwaukee, WI has had a highly decorated two weeks since winning both events at the ACC Indoor Championships. She was named ACC Meet MVP for track events and also the Southeast Region Women’s Indoor Track Athlete of the Year by the USTFCCCA. Kendrick will join her in the 200 as one of the last at-large bids.

Jasmine Edgerson is a third entry in the women’s 60 dash for the Tigers. The junior out of Marietta, GA ran a personal best 7.27 at the ACC Championships in a silver medal effort. Also in the women’s hurdles, freshman Keni Harrison (Clayton, NC) will participate in her first NCAA Championships meet. She had a time of 8.20 during the season.

The lone field event competitor heading west this week with the Tigers will be Jasmine Brunson in the triple jump. She has the fourth-best seeded jump after connecting on a leap of 43’3.75″/13.19m in a gold medal performance at the ACC Indoor Championships.

The NCAA Championships will be web streamed live by ESPN3 both nights.