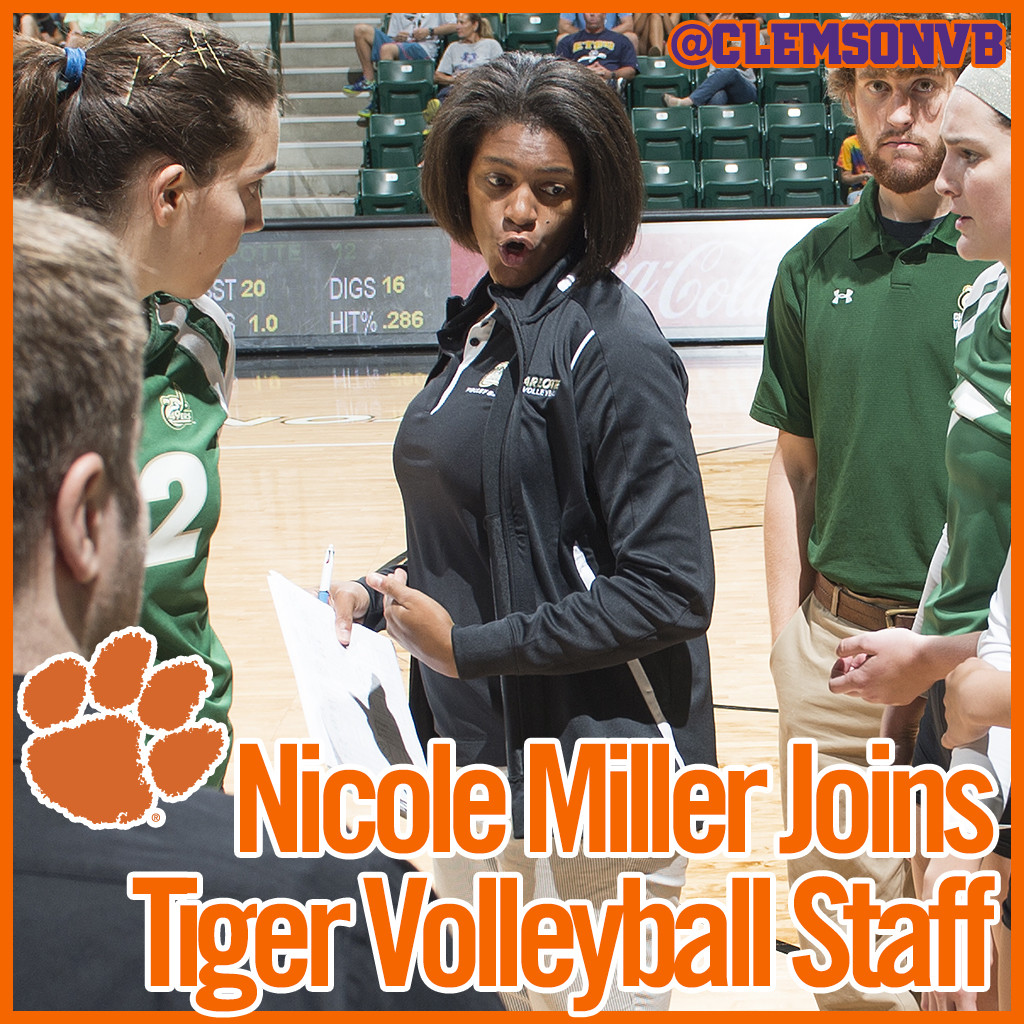 CLEMSON, S.C. – Nicole Miller has been named an assistant coach with the Clemson volleyball program, Head Coach Hugh Hernesman announced on Thursday. Miller joins Hugh, who was named the Tigers’ head coach in March, and his wife, Stephanie, who was previously added to the staff as an assistant coach, after spending one year at the University of North Carolina at Charlotte.

“We are thrilled to add Nicole to our staff and volleyball family. I’ve known Nicole for several years, since her time at the University of Houston, and have developed a great amount of respect for her over those years,” said Hernesman. “She is well-respected in our profession and someone of very high character, which was important to us in hiring this position. Nicole came to the forefront right away, and was, simply stated, a very good fit. She has proven to be an excellent recruiter with a good eye for talent, and has developed a great number of personal relationships with coaches of all levels, which will be invaluable in her role as our Recruiting Coordinator.”

“I want to thank Hugh for the opportunity to join the Clemson family. The familial atmosphere that the athletic department and the volleyball coaching staff provide made me feel right at home,” noted Miller. “Clemson provides great academic support and amazing facilities, and competes in a top conference, all of which are great recruiting tools. I’m looking forward to this next step in my career and I’m excited to be a Tiger.”

Miller served as assistant coach and recruiting coordinator at Charlotte, where she helped the 49ers earn 17 wins (for the first time since 2006) and a berth in the Conference USA tournament (the program’s first appearance in a conference tournament in four years). She worked primarily with Charlotte’s middle hitters and also developed the team’s system for blocking which led to improved numbers in solo blocks, block assists and total blocks. Miller also managed the Niners’ recruiting budget, travel and database. She also organized the program’s fundraising efforts, facilitated relationships with alumni and assisted with office functions such as ordering equipment, scheduling preseason tournaments and making team travel arrangements.

Prior to arriving in Charlotte, Miller spent the 2012 and 2013 seasons as an assistant coach at the University of Cincinnati. For the Bearcats, she also served as recruiting coordinator, and was in charge of developing a recruiting plan, maintaining the budget and organizing travel for all facets of recruiting. In 2010 and 2011, Miller held the same position at the University of Houston.

Miller began her collegiate coaching career as a graduate assistant at Mississippi in 2008 and 2009. Prior to the stint with the Rebels, she was the head coach of the A5 Mizuno Volleyball Club in Atlanta, Ga. for two years.

Miller graduated from the University of South Carolina in May 2006 with a degree in Business Economics and a minor in Business Management. She played volleyball for the Gamecocks from 2002-05, and served as team captain her sophomore, junior and senior seasons.