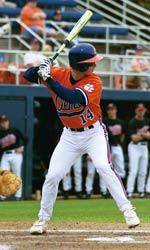 From the ranks of these standouts will be the winner of the prestigious Dick Howser Trophy, to be announced at 10:30 a.m. (CDT) on Friday, June 14, 2002, in the Old Lobby (second floor) of the Courtyard by Marriott, 101 South 10th Avenue, Omaha, Nebraska.

Outfielder Wes Reohr of Penn State is the second Nittany Lion (Michael Campo, 2000) to cop NCBWA District I Player of the Year. The winner of PSU’s Most Improved Player award, he posted a team-high .393 average, with nine home runs, 11 doubles and 38 RBI. The senior also had a team-best 75 hits, third on the all-time single-season hit chart at Penn State. The 75-hit performance was also fifth in the Big Ten in 2002.

The District II honoree is Tom Merkle of New York Tech. He led the team with a .446 batting average, 20 home runs, 68 RBI, 158 total bases and an .849 slugging percentage. His 20 round-trippers (0.38 per game) were 10th nationally in the latest NCAA rankings. The senior third baseman also scored 60 runs and recorded six stolen bases.

In District III, catcher Jeremy Brown of Alabama garners accolades. The senior started all 66 games for the Crimson Tide this season, batting .320 with 11 homers and 64 RBI. Defensively, Brown handled 471 chances and made only one error (.998 fielding percentage). He is one of 10 semi-finalists for the Johnny Bench Award, honoring the nation’s top catcher.

Clemson shortstop Khalil Greene is the winner in District IV. The senior is third nationally in hitting (.482) and is also among the nation’s leaders with 24 home runs. The ACC Player of the Year, he also has 29 doubles and 79 RBI in 64 games. He boasts a .561 on-base percentage and a school-record .886 slugging mark. He also holds the best career fielding percentage by a Tiger shortstop (.966), having committed just 11 errors. Greene is the second straight Tiger to earn District IV honors, following teammate Jeff Baker’s recognition last season.

District V features the No. 1 overall selection in the 2002 Major League Baseball Draft, pitcher Bryan Bullington of Ball State. The Mid-American Conference Pitcher of the Year led the conference in nearly every pitching category. He had a school-record 139 strikeouts, pushing his career mark to a school and league-best 357. The junior righty led the MAC with 11 wins, a 2.84 ERA and 104.2 innings pitched. He allowed only 18 walks and held foes to a .222 batting average.

From District VI the NCBWA selected a Nebraska standout for the second straight year when outfielder Jeff Leise was named. An All-Big 12 First Team selection, Leise enters this weekend’s Super Regional with a .381 batting average, 12 homers, 49 RBI and 23 stolen bases. He is also a standout in the classroom, earning CoSIDA/Verizon Academic All-America honors. Former NU first baseman Dan Johnson won the honor a year ago.

Two players share the organization’s District VII choice – Tulane second baseman James Jurries and pitcher Justin Simmons of Texas. Jurries was valuable to the Green Wave at more than one position this season, also seeing time at first and third base. The 2002 Conference USA Player of the Year, he hit .400 with 20 home runs and 30 stolen bases. The second straight player from Tulane (Jake Gautreau) to win in the district, Jurries also led the team with 77 runs, 96 hits and 74 RBI. Simmons was one of the nation’s top starters en route to the Longhorns’ Super Regional appearance. The sophomore hurler was the Big 12 Pitcher of the Year after compiling an NCAA-best 14-1 record along with a 2.11 ERA. He was the first UT pitcher since 1975 (Richard Wortham, Jim Gideon) to begin a year with 14 straight victories.

Outfielder Ryan Kenning of New Mexico State is the District VIII Player of the Year. The senior finished ’02 with a .319 batting average while leading the nation with 96 RBI. He also had 24 home runs, one shy of the NMSU record. Kenning also had a team-best .725 slugging percentage. He started 60 of 61 games and added 15 doubles and three triples.

Finally, the District IX selection was Nate Gold of Gonzaga. A senior first baseman, he leads the nation with 33 home runs, an average of more than one every two games (0.59). The West Coast Conference Player of the Year, he also had 76 runs batted in, setting school records in both homers and RBI. He finished the season with a .333 average, 59 runs, 17 doubles and an .842 slugging percentage.