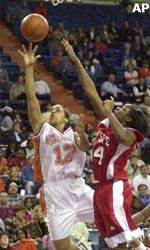 CLEMSON, S.C. – Tynesha Lewis hit a 15-foot jumper to give North Carolina State its first lead with 33 seconds to go, keying the Wolfpack’s 16-0 closing run that stunned No. 17 Clemson 56-50 Sunday.

Reserves Christien Greene and Amy Simpson hit two foul shots each, then Simpson drove for a basket, Monica Bates made a follow shot and Adeola Olanrewaju tied the game at 50.

After Clemson missed three scoring attempts, including drives by Krystal Scott and Marci Glenney, Lewis dribbled into the lane and scored the go-ahead basket.

Nuria Forns missed a straightaway 3-pointer with 20 seconds left for Clemson, then Ivy Gardner and Lewis sealed it with two free throws each.

Bates led the Wolfpack with 15 points, their only double-figures scorer.

The Wolfpack won for the first time in six years at Clemson, and for the third straight time this season.

It sure didn’t look that way in the first half.

North Carolina State had 19 turnovers and only 15 points in the opening half.

Clemson didn’t taken enough advantage, leading 28-15 at the break and that would prove costly.

The Lady Tigers made only eight of 31 shots (25.8 percent) in the second half. They missed their final eight shots and have lost three straight games.